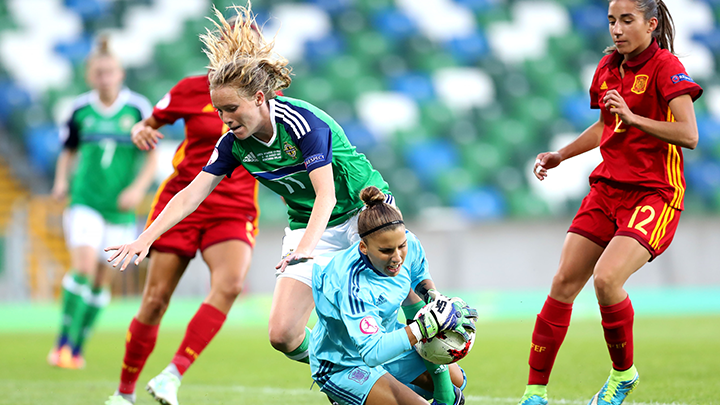 The ‘derby’ game between Northern Ireland and Scotland will be top billing from a local perspective on matchday two of this year’s UEFA Women’s Under-19 Championship.

Both teams lost their opening games in Group A on Tuesday and realistically need a win on Friday (11 August) to keep alive their chances of reaching the semi-finals of the tournament.

Northern Ireland produced a superb defensive performance in their 2-0 defeat to Spain and were restricted to only glimpses of what they can do when pushing forward.

The Scots also had their backs against the wall in game one. They were put under constant pressure by Germany, although they did create a few decent chances as they lost out 3-0.

Northern Ireland team manager Alfie Wylie is expected to play an attacking formation against Scotland which will allow Northern Ireland’s wingers in particular to get on the ball and have a real go at Mourneview Park in Lurgan (7pm kick-off).

Scotland will no doubt be keen to show their attacking prowess as well. They scored 28 goals in qualifying, conceding five, and striker Erin Cuthbert was second highest scorer with 10 goals.

The other game in Group A is a real heavyweight clash (at Shamrock Park in Portadown, 3pm kick-off) featuring four-times tournament winners Germany against Spain, who have lifted the trophy once in the past and finished runners-up in each of the past three seasons.

Both teams were impressive in their opening matches, displaying lots of silky skills and good technical ability backed up by a strong work ethic.

A win for either side would see them safely into the semi-finals, which are being played at the National Football Stadium at Windsor Park on 17 August.

At the National Football Stadium on Friday there’s a top of the table clash between England and The Netherlands (7pm kick-off) – with a place in the semis up for grabs.

Both teams were impressive in their opening games. A strong second half performance helped England to overcome Italy (2-1), while the Dutch dominated in the opening 45 of their game against holders France and secured a 2-0 win.

France, meanwhile, need to bounce back against Italy in the early kick-off in Belfast tomorrow (3pm) to boost their hopes of reaching the semis and retaining the trophy they won in Slovakia last summer.

The Italians, of course, will also be pushing for a victory, so it should be a fascinating clash.

Tickets for all four games are on sale via the Ticketmaster by clicking here, while the full list of fixtures and further information is available here