England and Scotland get consolation of WU20 World Cup play-off The semi-finals of the 2017 Women’s U19 Euros will see Germany face France and The Netherlands take on Spain.

Germany, who defeated Northern Ireland 6-0 this evening, and the Netherlands, who drew 3-3 with Italy earlier today, had already qualified for the last four after winning the first two of their three group games.

Spain finished in second place behind Germany in Group A when they defeated Scotland 1-0 at Mourneview Park in Lurgan this evening.

And holders France booked their place in the semis thanks to a slender 1-0 victory over England at Ballymena Showgrounds earlier today which saw them finish as runners-up in Group B.

However, there was a consolation for England and Scotland, who both finished third in their respective groups. They will now contest a play-off for a place in next year’s FIFA WU20 World Cup in France. And that play-off game is being staged at Mourneview Park in Lurgan on Thursday (17 August, 15.00) after it was switched from Ballymena.

Both semis in the Women’s U19 Euros are being staged at the National Football Stadium at Windsor Park on Thursday. Germany will face France in the first of them in Belfast (15.00 start), while The Netherlands will take on Spain in the second semi at 19.00.

Spain 1 Scotland 0
Spain booked their place in the semi-finals with a narrow 1-0 win over Scotland at Mourneview Park which saw them finish second in Group A.

However, there was a consolation for the defeated Scots, who defended superbly, as they secured a Women’s Under-20 World Cup play-off spot against England.

A seemingly relentless wave after wave of Spanish pressure continued and they
were so close to going ahead on 25 minutes, however the busy Scottish keeper Rebecca Flaherty produced another great save from Maite Oroz, pushing her goal-bound effort onto the crossbar.

Spain continued to press, with the seemingly unbeatable Flaherty constantly thwarting their efforts. When Garcia blazed over on 44 minutes the Scottish task of simply keeping themselves in the game until half-time was complete.

The second half started in much the same vein with Spain in the ascendancy and on 56
minutes the breakthrough eventually came as Patricia Guijarro fired low into the
bottom corner despite Flaherty getting a hand on the shot.

However, there was drama two minutes into added time when the Scots almost levelled the game right at the death as a well struck effort from Chantelle Brown went narrowly over.

Scotland, to their immense credit, defended superbly throughout the match but rarely threatened up front and in the end it was Spain who comfortably celebrated the victory and can now look forward to a mouth-watering clash against the Netherlands on Thursday.

England v France
The winner-takes-it-all game in Group B at Ballymena Showgrounds this afternoon was won by France.

Les Bleus got off to the better start with Mathilde Bourdier testing England goalkeeper Sandy MacIver inside the first 15 minutes, but the rest of the half belonged to England as Alessia Russo twice fired over the top from the edge of the area.

On 24 minutes a fine run and cross from the right by Mayumi Pacheco fell to Georgia Allen whose effort was bundled behind for a corner which, when put over by Megan Finnigan, caused some confusion for the French defence but was eventually cleared.

On 28 minutes the English girls had a penalty appeal waved away by the Lithuanian referee when Rinsola Babajide fell to the floor just inside the box, then Taylor Hinds curled a cross in from the left which had too much on it for Allen who came storming in at the back post.

The final action of the first period saw Heléne Fercocq run clear of the England defence only to put her chip over MacIver and narrowly wide.

A couple of early second half chances came to nothing for England, who started the second half on the front foot.

On 52 minutes the lively Bourdier had a shot smothered by MacIver, and just minutes later a Russo free-kick was saved by Mylene Chavas in the France goal.

It was nip and tuck as the game entered the final quarter and the save of the game saw Chavas throw herself to her left to push away another Russo free-kick.

Most of the drama, however, was saved for the final minute of normal time when a cross from Emelyne Laurent was deflected into her own net by an England defender to leave the final score 1-0 to defending champions France.

England had the better chances in the game, but they will have to make do with the consolation of a World Cup play-off spot.

Netherlands 3 Italy 3
In the other game in Group B, played at Shamrock Park in Portadown this afternoon, Netherlands drew 3-3 with a spirited Italian side.

Netherlands, who had already qualified with two wins out of two, gave several players their first start of the tournament and their team lacked the fluency shown in their first two games.

Italy took the lead in the sixth minute through an own goal. Italian winger Gloria Marinelli played a long ball into the box which was met by Dutch centre back Aniek Nouwen. Under no pressure she headed the ball back towards Dutch keeper Jacintha Weimar, but it sailed over the keeper’s head into the net.

The Dutch equalised when left back Jamie Altellar delivered a pinpoint cross to striker Fenna Kelma, who outjumped the Italian keeper to head home from eight yards.

Italy’s Arianna Caruso smashed a drive against the crossbar from distance just a minute before the Netherlands took the lead through a penalty. Kelma was upended in the box and Nouwen stepped forward to coolly slot the spot kick into the corner, making amends for her earlier faux pas.

The Italians looked lively at the start of the second half with Benedetta Gianno flashing a shot just inches wide and then the same player forced the Dutch keeper into a decent save at the near post.

And on 66 minutes Italy got a deserved equaliser thanks to a stunning long range effort from Alice Regazzoli.

Italy continued to press with Caruso firing just over the top. Then Italy, who were the first country to exit the tournament after losing to England and then heavily to France, scored a peach of a goal on 82 minutes to take the lead. Caruso slid a lovely ball to substitute Annamaria Senturini down the left and she curled a beautiful shot round the Dutch keeper into the bottom corner of the net.

The Dutch had the ball in the net a minute later but it was ruled out as the scorer was ruled offside. However, they levelled on 94 minutes when the ball dropped from a corner into the path of Dutch sub Ashleigh Weerden and she pinged it into the bottom corner to make it 3-3. 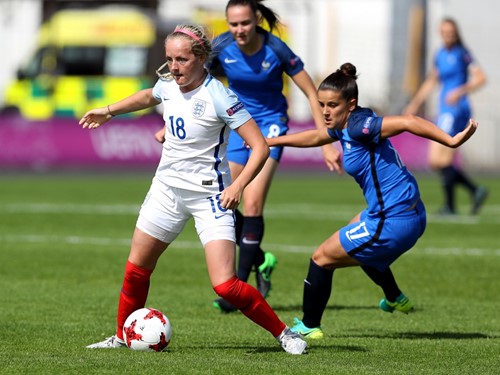