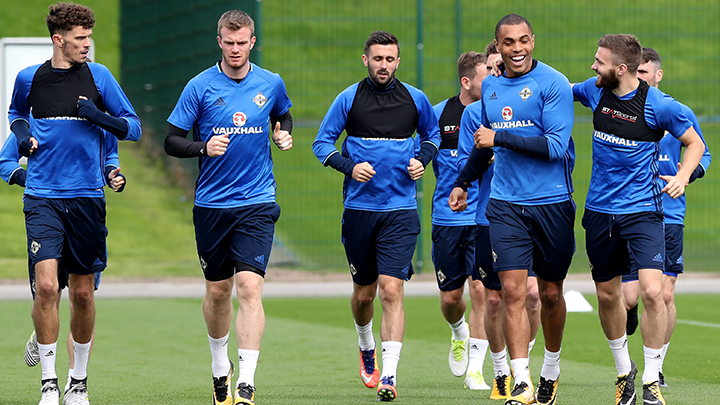 Michael O’Neill is not taking the opposition lightly as Northern Ireland prepare to face San Marino in Serravalle on Friday evening.

The Northern Ireland boss insists his players will be fully focused when they take on the team languishing at the bottom of World Cup Qualifying Group C.

Despite being without regular centre backs Gareth McAuley and Craig Cathcart, as well as striker Liam Boyce and midfielders Paddy McNair and Jamie Ward among others, the manager believes his squad is more than capable of getting the desired result at the San Marino National Stadium.

“We are focused on this game and I know the team will go all out to get a win,” he said.

He revealed the mood in the camp is good and he has the luxury of having four on-form strikers to choose from.

Conor Washington has started the season brightly at QPR, while Euro 2016 qualifying campaign talisman Kyle Lafferty is enjoying playing regularly again – and scoring – at new club Hearts. Josh Magennis has found his shooting boots at Charlton, too, while Shay McCartan is keen to show the boss what he can do after making his international debut against New Zealand back in June and his move to Bradford City over the summer.

The engine room is looking strong, too. Steven Davis and Ollie Norwood are putting in great performances already this term with Southampton and Fulham respectively, while Chris Brunt has started well with West Bromwich Albion. And Stuart Dallas, who has just extended his contract with Leeds United, is in fine fettle these days.

Beyond that quartet the likes of Niall McGinn, Corry Evans, who is back in the panel following a lengthy period on the sidelines due to injury, Shane Ferguson, Matty Lund and Paul Paton are more than capable of fitting seamlessly into the midfield unit.

Michael O’Neill is also confident his backline can keep San Marino out. Despite not playing regularly for Norwich this season, Michael McGovern has looked sharp in training.

Away from incessant transfer speculation, and a niggling early season injury, Jonny Evans trained well yesterday, while the vastly experienced Aaron Hughes is always ready and willing to perform for his country.

Right back Conor McLaughlin is also in confident mood and really buzzing following his step up to Championship level with Millwall. Tom Flanagan, fresh from signing a new deal at Burton Albion, is keen to get game time as well. And there are others, including Lee Hodson, who can fill the breach.

And if Germany overcome Czech Republic in Prague on Friday evening then a draw in Monday’s game against the Czechs would guarantee second place in the group for Northern Ireland and perhaps cement a play-off slot, however that would be dependent on results in other groups.