Italy are first country to exit Women’s U19 Euros 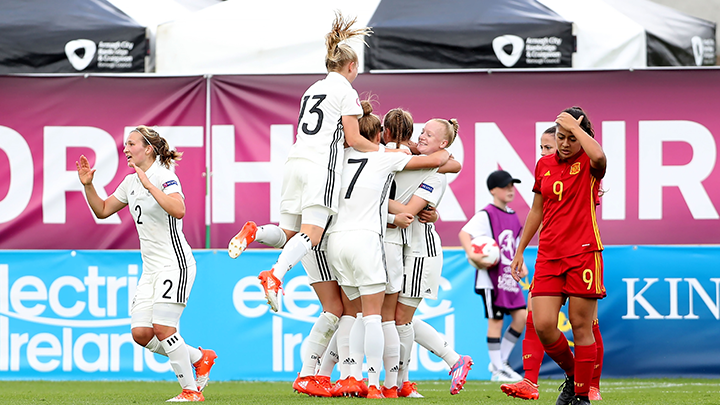 At the end of matchday two of the 2017 Women’s U19 Euros, two countries have definitely reached the semi-finals.

Both Germany and The Netherlands have 100% records – with two wins out of two games. And those six points mean they are both in the last four.

Today’s games also saw Italy become the first country to exit the tournament. Their heavy defeat to France means they are out of the competition after two defeats in their two games to date.

Germany 2 Spain 0
Germany had just a bit too much nous for Spain in the early kick-off in Group A today.

It was a bad day at the office for the Spanish, who had a player sent off late on and saw one of their most influential players carried off the field on the stroke of half-time.

A fine finish from Luca Maria Graf and a bizarre goal from Dina Orschmann at Shamrock Park in Portadown were enough for Germany to put one foot in the semi-finals – and that became both feet later following the draw between Northern Ireland and Scotland.

It was a tight affair early on as both teams looked to build on their opening day victories and the game didn’t have a clear chance until the 16th minute when Spanish forward Lucia Garcia shot from the edge of the area but her effort was blocked.

German keeper Vanessa Fischer was then forced into a save on 24 minutes when Laura Maria Perez worked some space for herself on the right of the German box and sent a fierce drive goalwards.

However, from the resulting corner it was actually Germany who benefitted. They launched a fast breakaway which eventually saw Laura Freigang feed the ball to Luca Maria Graf who ran into the box before neatly slotting the ball home to make it 1-0.

Germany carved out another couple of decent chances around the half-hour mark before Spain were forced into an early substitution when Andrea Sierra limped off to be replaced by Natalia Ramos.

On the stroke of half-time Spanish winger Nuria Rabano, who was excellent in the win over Northern Ireland, was carried off the pitch following a heavy challenge. She was replaced by Ainoa Lopez Anitua after the break.

Spain were still very much in the game in the early part of the second half. However, on 64 minutes the game took a bizarre twist that resulted in the Germans doubling their lead.

A free-kick from deep inside her own half was floated in by Dina Orschmann towards the Spanish box. There didn’t look to be any danger until Spanish keeper Noelia Ramos misjudged the bounce of the ball and could only watch as it landed in the back of the net to put Germany in control of the tie.

As the Spanish tried to find an opening, they found their chances limited by a solid German defence,and things got worse for them when substitute Ramos received her second yellow card of the day and her marching orders after a foul on Freigang in the 90th minute.

Italy 1 France 6
With the Italians and the French having lost their opening games this was a must-win for both nations and it was Italy who showed the greater urgency from kick-off.

An early chance from Serturini went narrowly wide and then a clever run from the same player saw her drift inside the French defence before driving a superb shot into the roof of the net on 8 minutes.

Regazzoli went close to extending the Italians’ lead on 25 minutes when her well struck effort went narrowly over the bar.

France, however, continued to battle away and got their reward on 34 minutes when a cross wasn't cleared by the Italian defence and Karadjov was on hand to head home.

The game suddenly changed, France started to believe, and on 37 minutes Bourdieu fired a low shot into the corner of the net to turn the game on its head.

Italy tried to bounce back. Gionna produced a fine effort, which was expertly tipped over by France keeper Chavas to ensure the half ended with the French 2-1 up.

The momentum of the game had now changed and when Bourdieu added her second and France's third on 58 minutes it was as good as game over.

Ollivier made it 4-1 on 69 minutes and Laurent 5-1 on 72 minutes to leave Italy's hopes of remaining in the competition in tatters.

To rub further salt into the wounds Gavory hit a sixth for France deep in injury time to give France an emphatic 6-1 victory.

Netherlands 2 England 0
The Netherlands made it two out of two with a commanding performance against England at the National Football Stadium at Windsor Park.

The Dutch were ahead on 10 minutes when Aniek Nouwen arrived at the back post and headed Quinty Sabajo’s corner past England goalkeeper Sandy Maciver.

The highly-rated Victoria Pelova showed why she is fast becoming one of the stars of this year’s Championship with a superb performance in midfield. She dominated the centre of the park and was crucial in cutting off England’s attacking play.

It looked like it would be one-nil at the break but two minutes into added time at the end of the first half the Netherlands got a crucial second goal. Joëlle Smits finished coolly into the bottom corner of the net.

In the second half England battled to get a foothold in the game but - just as in the Women’s Euros last week – the young Lionesses could not break down the Dutch defence.

It finished 2-0, meaning that the Dutch are guaranteed a place in next week’s semi-finals. They will have to wait until after the final round of group games to see who they will play.

England now face a do-or-die game against France at Ballymena Showgrounds at 3pm on Monday.