Lafferty nets fifth of the season for Hearts 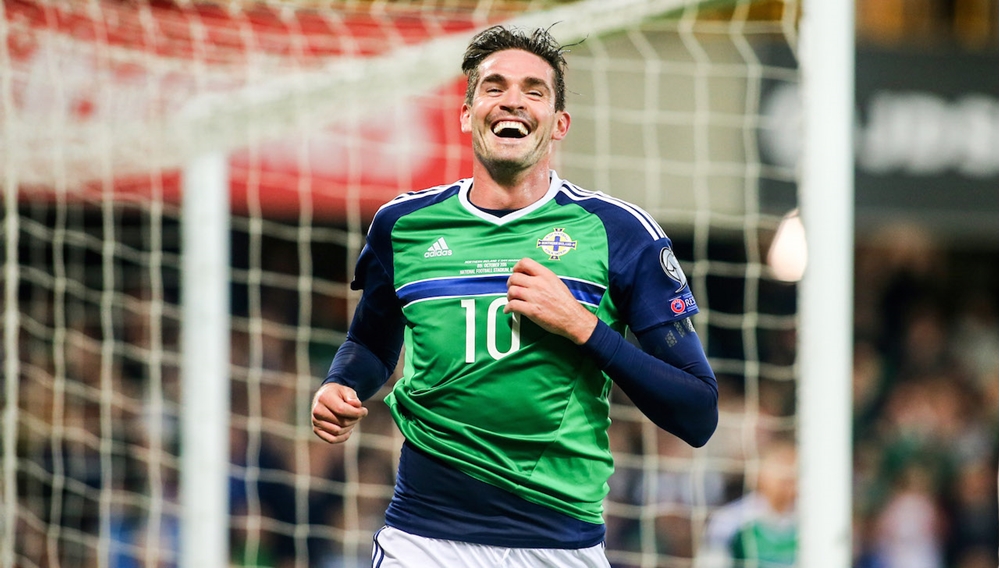 Striker Kyle Lafferty continued his fine early season form when he was on target for Hearts in their 2-1 defeat at Motherwell in the Scottish Premiership at the weekend.

The Fermanagh–born forward, who has now scored five goals in eight games this term, fired past home keeper Trevor Carson from 22 yards to give the Edinburgh outfit the lead with half an hour played.

In fact it was a good weekend for Michael O’Neill’s strikers with both Josh Magennis and Shay McCartan also on the scoresheet for their respective clubs in League One.

Magennis sealed all three points for Charlton when he headed home his second goal of the campaign in a 2-0 success at Rotherham to move the Addicks up into fourth spot in the table.

Meanwhile, Shay McCartan opened his account for Bradford City who were held to a 3-3 draw after letting slip a three goal lead at Walsall.

In the National League, former under-21 international Matt McClure scored his third of the season as Aldershot Town lost 2-1 at home to Chester who had current under-21 goalkeeper Conor Mitchell in their starting line-up.

In the Premier League defender Craig Cathcart came on as a substitute for Watford for his first appearance of the season, unfortunately, he lasted just 19 minutes before being taken off with a knee injury.

On a more positive note, Chris Brunt played the entire 90 minutes for West Brom who dropped their first points of the season in a 1-1 draw with Stoke, while skipper Steven Davis made his third start of the new campaign in Southampton’s scoreless encounter at newly promoted Huddersfield Town.

The Saints have now scored just one goal from open play in their first three games, but Davis insists the team are still taking in Pellegrino’s ideas and attacking philosophy and he is sure the goals will start flowing.

Davis said: “I wouldn’t judge it based on these games. I think we’re still creating good opportunities and getting in good areas and it’s just about getting that clinical edge into our game.

“The goals will come if we keep creating those chances and hopefully we will see that.”

After scoring in the midweek League Cup tie against Leicester City striker Caolan Lavery was given a first league start of the season as Sheffield United defeated Derby County 3-1 at Bramall Lane.

His afternoon was cut short though after he sustained a cheek injury following a collision with Derby County’s Marcus Olsson.

“It was a 50/50 ball in the air, both boys went for it,” said Blades manager Chris Wilder, “unfortunately, Caolan came out with a big smash to his cheekbone, so we’ll have to assess that.”

Finally, in League Two under-21 midfielder Dale Gorman was red-carded after just 35 minutes of Stevenage’s 1-0 success at Barnet on Saturday.