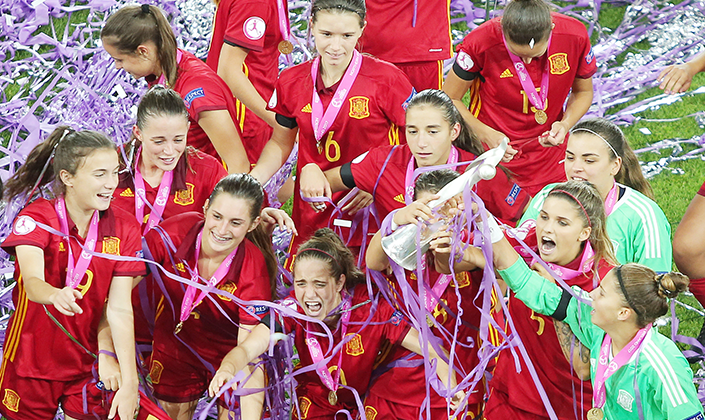 The Spanish came from behind twice to win tonight’s final at the National Football Stadium at Windsor Park by three goals to two.

And attacking midfielder Guijarro, who lifted the Golden Boot after notching five goals in the tournament, played a key role as the Spanish gained revenge on France, who defeated them in last year’s WU19 Euros decider in Slovakia.

After losing three finals in a row, the Spanish must have thought it was going to be another one of those nights when the holders opened the scoring in front of 3117 spectators in Belfast.

There were only three minutes on the clock when France winger Emelyne Laurent flew down the wing and drilled the ball low into the box where Mathilde Bourdieu was on hand to slam it into the net from close range.

Spain captain Aitana Bonmati produced a fine cross into the area five minutes later but it was headed out for a corner.

However, the Spanish deservedly drew level on 17 minutes when Paula Fernandez delivered a corner into the six-yard box and Guijarro stretched out a leg and steered the ball home.

In the 21st minute Laurent almost put the French ahead again when she smashed in a shot from 25 yards but it crashed off the crossbar and the Spanish defence cleared the danger.

Four minutes later Bonmati tricked her way past her marker down the left and delivered a pinpoint cross to Maite Oroz six yards out but she directed her shot straight at France keeper and captain Mylene Chavas.

Spain had the bulk of the possession for the remainder of the half and had a couple of half-chances, but it remained level at half-time.

The Spanish continued to push forward after the break, however the French defence held firm with Julie Piga and substitute centre back Elisa De Almeida putting in some fine tackles.

On 66 minutes Spanish midfielder Damaris Egurrola and France midfielder Sana Daoudi had a nasty clash of heads, but after treatment both returned to the action.

In the 70th minute Laurent grabbed France’s second of the game after making a blistering run from the halfway line and outpacing the Spanish defence before coolly curling the ball past Spanish keeper Noelia Ramos into the corner of the net.

Five minutes later Bourdieu pounced on a mistake by the Spanish defence and smashed the ball over the top from an angle.

Then, on 76 minutes, a looping header by Spain’s Egurrola had to be tipped over by Chavas.

France’s solid defensive unit continued to repel the silky Spanish skills until the 84th minute when Spanish left back Carmen Menayo launched a free-kick into the area and Egurrola rose highest to flick the ball past Chavas from eight yards.

Two minutes later French full back Pauline Dechilly was sent off by Bulgarian ref Volha Tsiareshka after receiving a second yellow card. Booked for a foul in the first half, the second yellow was given for taking a free-kick too quickly.

It was a harsh decision and it was arguably a turning point in the game.

The Spanish sensed it was time to turn the screw and on 89 minutes Menayo produced another excellent delivery into the penalty area from a free-kick and Guijarro outjumped the French defence to head the ball home from close range – and the Spanish jigged with joy.

France, however, refused to lie down and deep into added time Spanish keeper Ramos had to be alert to keep out a stinging drive from Bourdieu.

In the closing stages the Spanish played keep-ball and at the final whistle there were scenes of pure joy as Spain’s golden generation of teenage female footballers finally delivered. 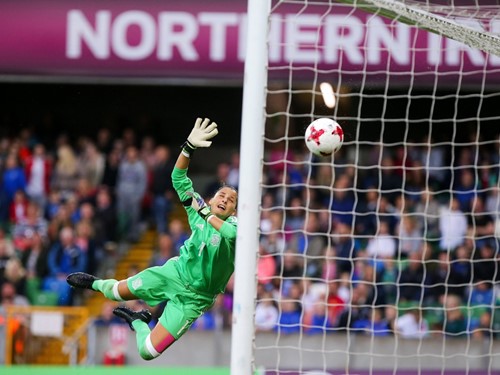 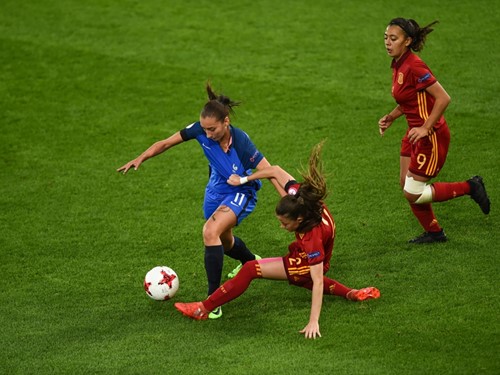 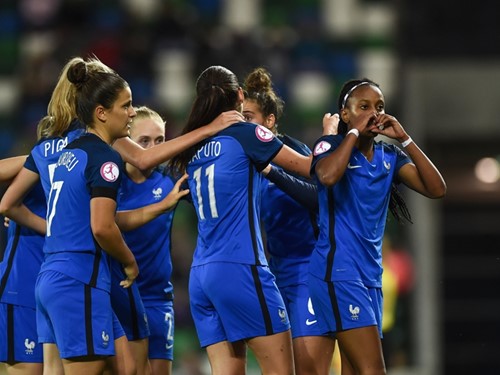 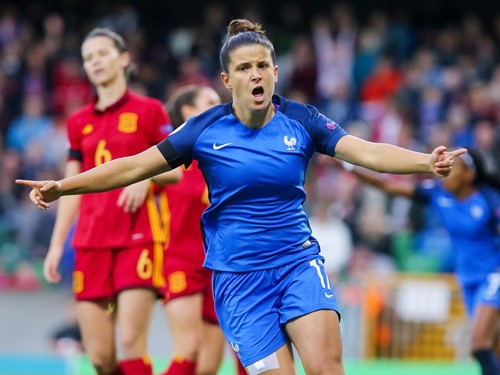 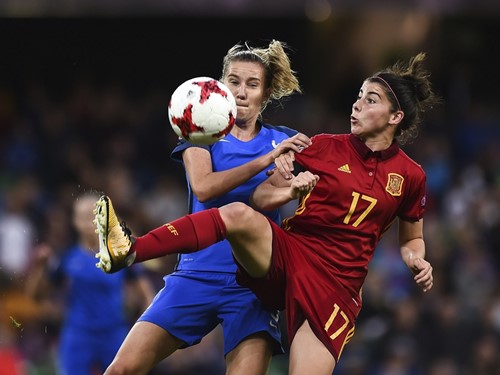 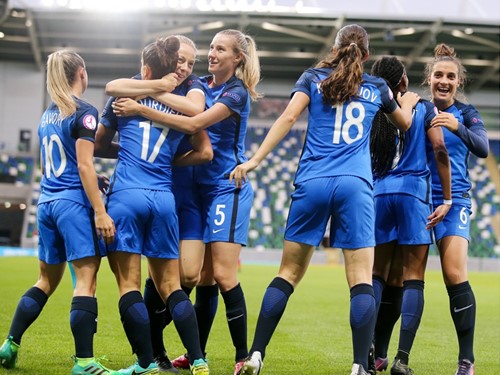 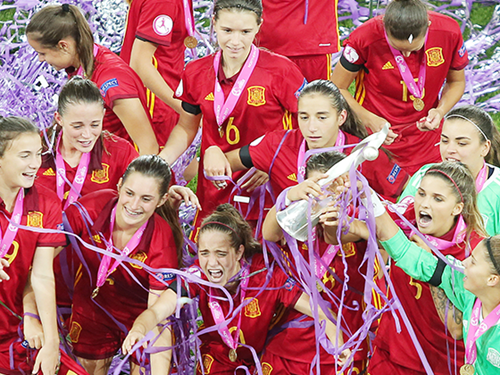 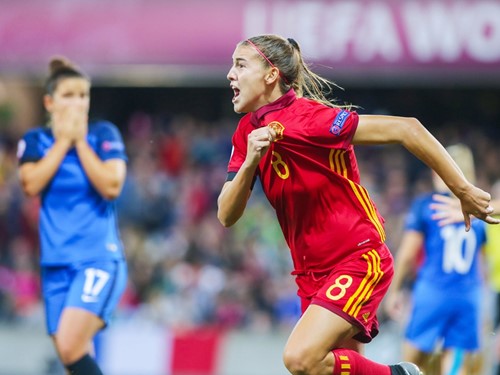 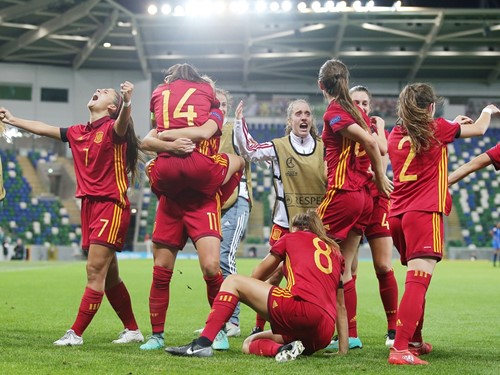 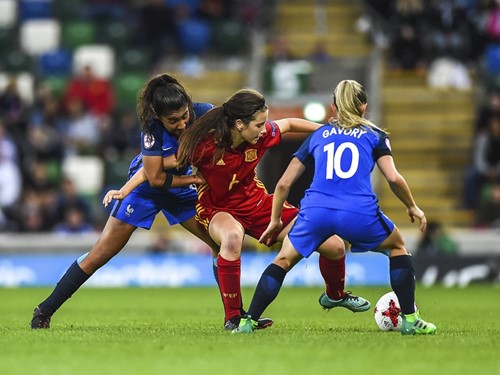 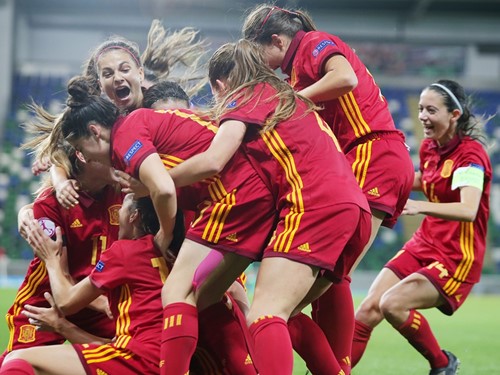 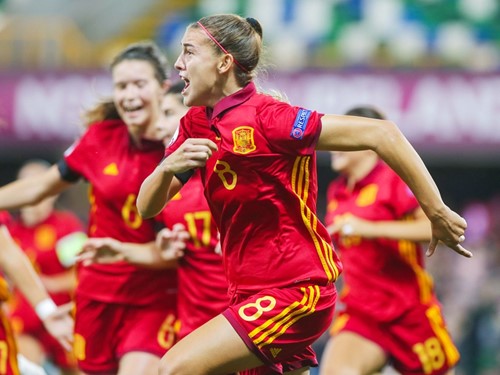 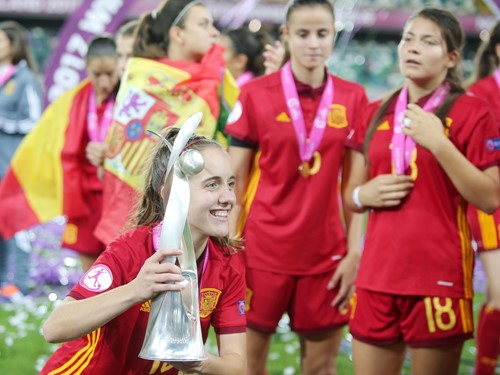