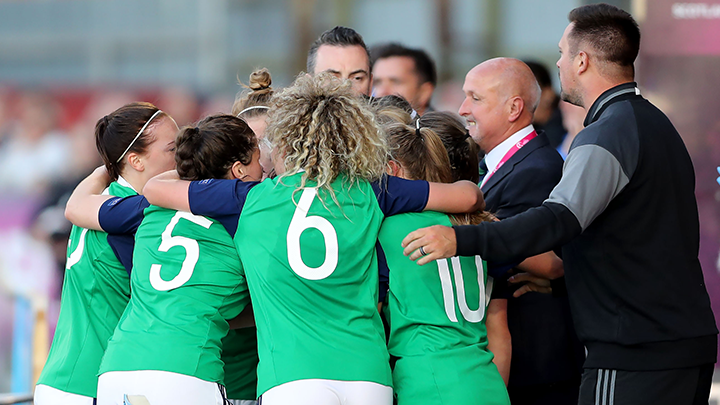 Northern Ireland still have a slim chance of reaching the last four of the UEFA Women’s Under-19 Championship Finals thanks to a battling 1-1 draw against Scotland this evening.

The draw meant Germany, who defeated Spain 2-0 earlier today, are definitely into the semi-finals from Group A.

However, who will join them in the last four is very much up in the air following the ‘derby’ draw at Mourneview Park.

Scotland looked to have the three points in the bag in the closing stages of the game but Northern Ireland kept pressing and grabbed a deserved point through a Louise McDaniel header.

If Spain (currently on three points) beat Scotland at Mourneview Park next Monday evening they will go through, while Scotland (one point) can reach the latter stages of the tournament if they beat Spain and Northern Ireland lose or draw against Germany in Ballymena on Monday evening.

However, if Spain (zero goal difference) and Scotland draw on Monday then Northern Ireland would progress if they beat Germany by at least three goals.

Scotland created the better chances in Lurgan this evening but Northern Ireland, who produced another excellent defensive display, had several chances, too.

Northern Ireland’s first opportunity came in the second minute when midfielder Megan Bell, who had an excellent game in the team’s engine room, shot wide of the target from a free-kick.

On 19 minutes Scotland had their first clearcut chance. Striker Kirsty Hanson played a neat one-two with winger Samantha Kerr and closed in on goal before firing a shot narrowly over the bar.

Five minutes later Megan Bell fed the ball out wide to Rebecca Bassett who produced an excellent cross into the box, but unfortunately it evaded both the Scottish defence and the Northern Ireland attack.

In the 28th minute Northern Ireland keeper Lauren Perry produced a great save to keep the Scots out. A rasping drive from Scotland midfielder Claire Adams was tipped onto the bar by Perry, who gathered the ball at the second attempt.

On 35 minutes Bassett laid the ball back to Megan Reilly out wide and she whipped in a great cross but it was blocked by the Scottish defence. Within minutes Reilly produced a good delivery from a free-kick but again it was cleared.

In the 39th minute Reilly’s prowess from dead ball situations was on display once more. She fired in a great corner, however the Scots snuffed out the danger.

Scotland upped the tempo at the start of the second half and they took the lead in the 46th minute when Hanson got in behind the Northern Ireland defence and slotted the ball past Perry into the net.

The Scots then piled forward but were repelled by the Northern Ireland backline, with captain Emma McMaster and centre-back partner Teresa Burns particularly impressive.

After a few wobbles following the goal, Northern Ireland began to assert themselves again. On 61 minutes Brenna McPartlan slipped the ball to Bassett and she sped forward before producing a shot which went just wide of the post. Then Leyla McFarland shot straight at the Scottish keeper when well placed.

In the 67th minute Adams produced a fine shot from distance which Northern Ireland keeper Perry pushed round the post – and later Perry palmed away a long range belter from Scottish defender Courtney Whyte. From the resulting corner Scotland centre back Donna Paterson headed the ball inches over the bar.

Northern Ireland tapped into their reserves of grit, skill and determination to push forward as the game neared the final whistle.

And the majority of the 1771 spectators in the ground erupted with pure joy when they conjured up an equaliser.

On 86 minutes Bassett forced a corner. Megan Reilly then produced yet another great set-piece delivery into the box where Louise McDaniel was on hand to head the ball home from close range. A magical moment.

And Bassett had the fans on their feet again shortly after the restart when she weaved her way into the box but the Scotland keeper saved – and the game ended all square. 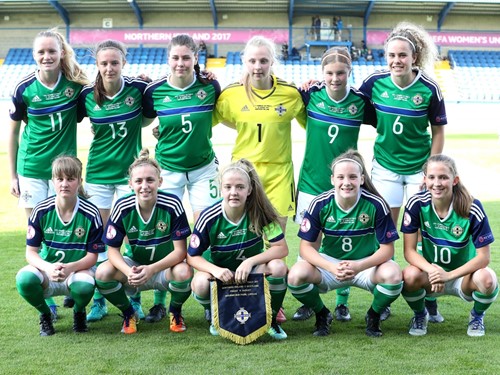 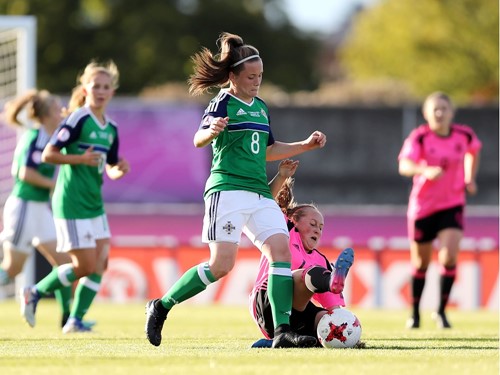 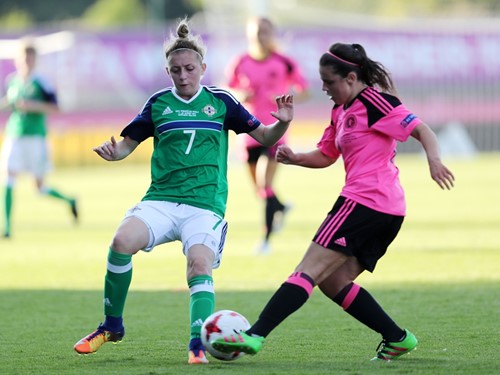 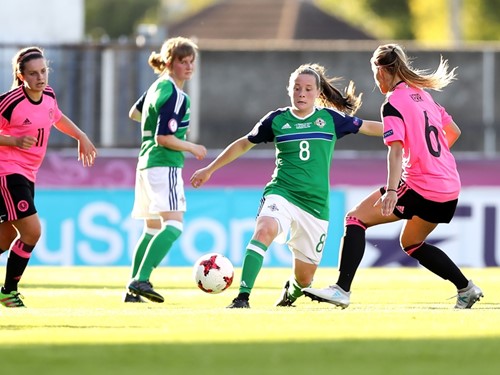 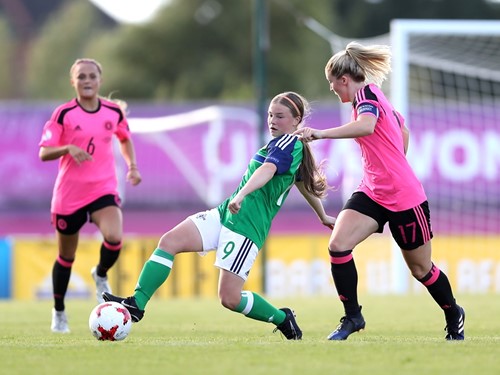 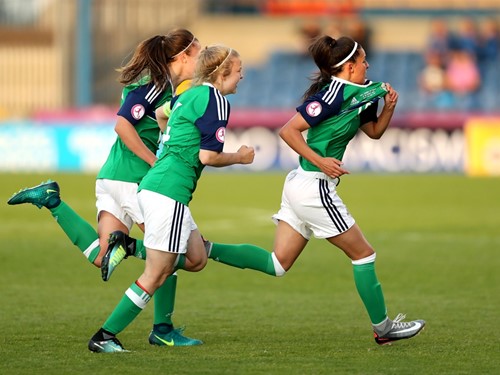 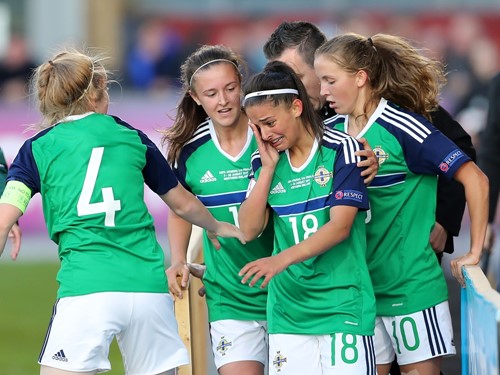 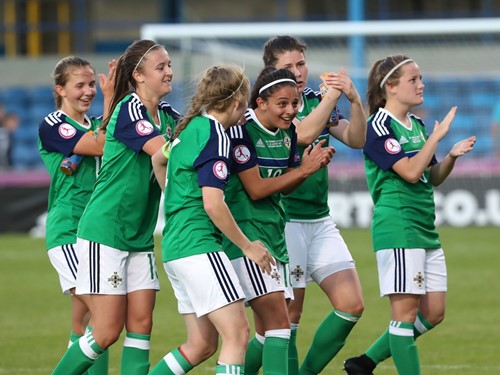 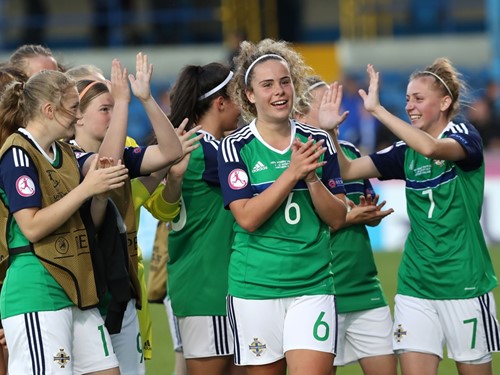 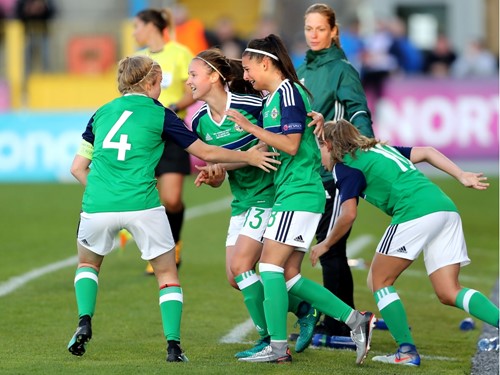 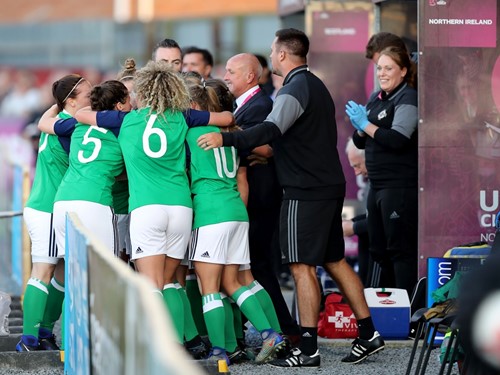