Your weekly roundup of our 'Boys Across The Water' 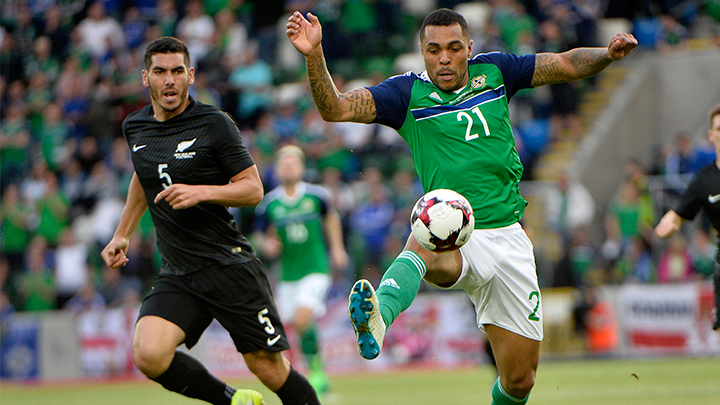 Winger Ryan McLaughlin gave Oldham Athletic a first-half lead at Walsall on Saturday but it was all to no avail as the League One side suffered a 2-1 defeat at the Bescot Stadium.

The 22-year-old former Liverpool trainee scored his first goal of the campaign when his teasing cross beat everyone to deceive goalkeeper Mark Gillespie to give the Latics a 32nd minute lead.

However, the home side fought back with two late second-half goals to consign Oldham, who also had Lurgan-born Cameron Dummigan in their line-up, to a third straight defeat this term.

Also on the scoresheet over the weekend was former under-21 international striker Matt McClure who scored twice for Aldershot Town who romped to a 6-0 victory over Guiseley in the National League.

Meanwhile, defender Alex Bruce scored just 15 minutes into his debut for Bury who lost 4-1 against one of his old clubs Wigan Athletic yesterday.

The 32-year-old, who was released by Hull City at the end of last season, has joined the ambitious League One outfit on a non-contract basis.

The opening weekend of the Premier League unfortunately began without Northern Ireland defenders Gareth McAuley (thigh) and Jonny Evans (ankle) who were both unavailable for West Brom’s encounter with Bournemouth.

Baggies defender Chris Brunt wasted no time though in chalking up his first assist of the season when his inch perfect free-kick in the 31st minute set up Ahmed Hegazi to score the winner on his debut for the Midlands outfit.

“I think in terms of the performance it was very good,” stated Davis, “We controlled the game for large parts and created a number of good chances.

“But obviously we’ve got to be more clinical in front of goal and take those chances when they come.”

Long-term absentee Ben Kennedy made a welcome return from injury when he played the final half-hour of Stevenage’s 1-1 draw at Colchester United in League Two.

Also back from injury was Josh Magennis who made the Charlton Athletic starting line-up after recovering from a knee complaint which forced him to miss the Addicks opening two matches.

In the National League former Northern Ireland under-21 striker Jamie Reid was substituted in the first-half of Torquay United’s 3-0 reverse at Gateshead with a suspected broken hand.

The 23-year-old is currently on a season-long loan at the Gulls from League Two side Exeter City.

Finally, in Scotland, goalkeeper Trevor Carson was red-carded on 63 minutes of Motherwell’s 4-1 defeat at St Johnstone.

The 29-year-old, who was one of three Motherwell players sent-off at McDiarmid Park on Saturday, was adjudged to have deliberately handled the ball outside the box.