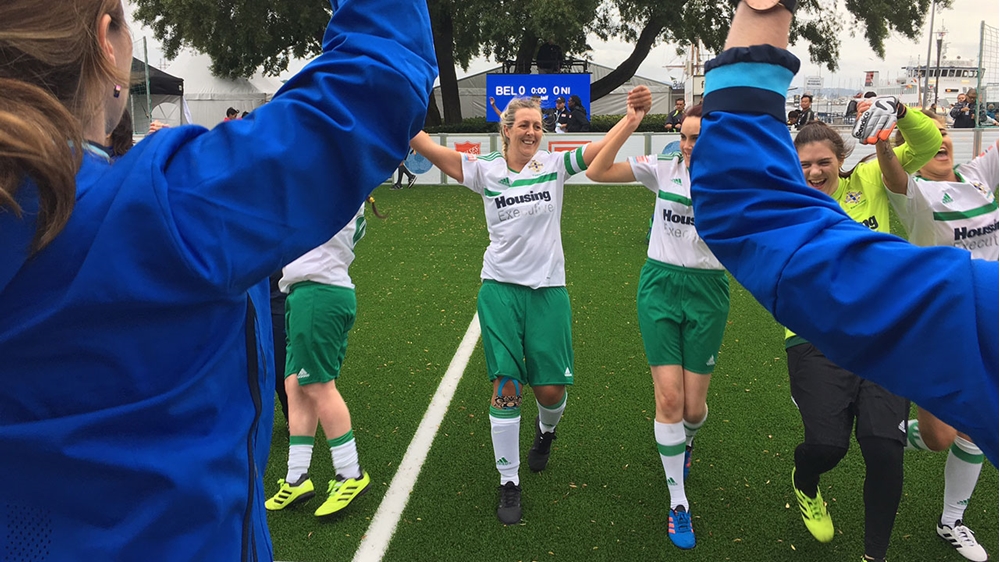 Northern Ireland Women claimed an 8-2 victory over Belgium in their opening game at the Homeless World Cup in Oslo.

Managed by Claire Rea and Clare Carson the Northern Irish girls created history by winning their first ever game at the tournament.

With the games lasting fourteen minutes it was the Green and White army who started on top as Phoebe Clawson played in Claire Masterson and he fired the ball into the net with aplomb.

One then became two as Lisa Donnan lashed a thumping strike from range that left the Belgian keeper stranded to give the home side a good lead.

Belgium then pulled a goal back as a through ball found their striker before she fired past Ashlee Young who was superb all game in her first ever game of competitive football.

To their credit Northern Ireland’s heads didn’t drop and they went 3-1 ahead two minutes before the break as Catrina Sheehan linked up well with Masterson who applied her trade at Cliftonville ladies when she was younger placed her effort into the net.

However, Belgium did pull a goal back on the stroke of the break as a shot beat the impressive Young from pinpoint range.

Northern Ireland came out of the blocks quicker in the second half and extended their advantage when Tracey Patterson who put in a brilliant performance with her range of passing played in Nicole McClurg and she gave the keeper no chance firing her effort across her and into the net.

Four became five when the sheer persistence of Clawson saw her latch on to a Patterson pass before she planted her effort into the net.

The girls then added to the scoring when Clawson linked up with McClurg before the latter cracked her shot into the net with ease to the delight of the coaches and spectators.

Then there would be two goals in quick succession as Clawson beat the Belgian defence before squaring to the onrushing Donnan and she tapped in with ease.

The scoring was complete in the final minute when Patterson linked up with Masterson before she give the keeper the eyes before finding the bottom corner to seal the first 3 points of the tournament.