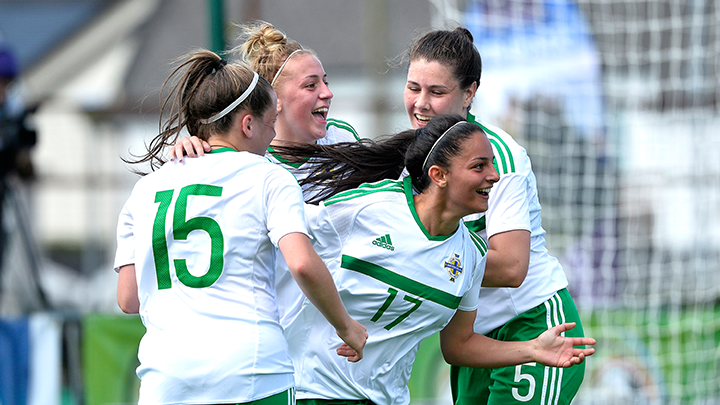 Six former winners will be vying for glory once again when the UEFA Women’s Under-19 Championship kicks off on Tuesday.

Only tournament hosts Northern Ireland - it will be their first appearance in the finals - and Scotland have not lifted the trophy in the past.

Northern Ireland are set to take on Spain, Germany and Scotland in the group stages, while the other group will see holders France, England, Italy and the Netherlands face each other.

Four-times winners Germany and France, the current holders, are among the favourites, while England, Italy, Netherlands and Spain, who have all won the trophy once, will fancy their chances of overall success.

Spain, who have actually finished runners-up in each of the past three seasons, will provide a massive test for Northern Ireland, who are managed by Northern Ireland National Women’s Coach Alfie Wylie.

In the two qualification rounds for the WU19 Euros 2017 (qualifying and elite) the Spanish scored 39 goals and conceded just two - and their striker Lucia Garcia was the highest scorer in qualifying with 11 goals.

In their second Group A game, at Mourneview Park in Lurgan on Friday (11 August, 19:00), Northern Ireland will come up against Scotland, who qualified for the tournament in style with three fine wins in the elite round.

The Scots, who have reached the finals on four occasions in the past, scored 28 goals in qualifying, conceding five, and striker Erin Cuthbert was second highest scorer with 10 goals.

Northern Ireland’s third and final group game is against Germany at Ballymena Showgrounds on 14 August (19:00). The Germans have been a dominant force in women’s football for several years, at all age groups, and they are expected to be strong contenders for the U19 title this summer.

After receiving a bye in the qualifying round they scored 13 in the elite round and only let in a single goal. The Germans begin their campaign against Scotland at the National Football Stadium tomorrow (15.00).

In the other group, England are expected to do well. England, who have reached the WU19 final four times, got a bye in qualifying but were impressive in the elite round where they scored 12 without reply in their three games.

England face Italy in their first group game tomorrow – at Mourneview Park (15.00). The Italians scored 10 and conceded two in the qualifying round and scored five, conceding three, in the elite round.

England and the Netherlands were the only teams to qualify for the finals without conceding a goal. The Netherlands scored 11 in the qualifying round and a further 10 in the elite round.

The Dutch drew 0-0 with France in the elite round, pipping them to top spot in their group. The French subsequently qualified for the finals as the best runners-up in the elite round groups. The two teams will now face each other again in the finals. Their game tomorrow is at Ballymena Showgrounds (15.00).