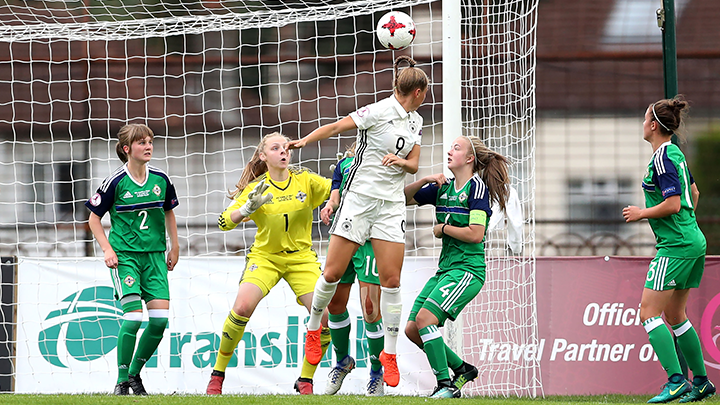 Four-times tournament winners Germany proved too hot for Northern Ireland to handle in their final group game in this year’s Women’s U19 Euros.

The Germans simply oozed class as Northern Ireland fought bravely to repel a relentless onslaught at Ballymena Showgrounds this evening in front of 1783 spectators.

Northern Ireland keeper Lauren Perry produced a string of fine saves, but despite her valiant efforts the Germans rattled six past her without reply.

The 6-0 victory for Group A table-toppers Germany means they will now face France, conquerors of England earlier today, in the semis, while Group B winners Netherlands and Spain will meet in the other last four game. Both are being staged at the National Football Stadium at Windsor Park on Thursday. First up is the Germany-France game (3pm) followed by the Netherlands-Spain clash (7pm).

The heavy defeat in Ballymena means Northern Ireland have also missed out on a FIFA WU20 World Cup play-off place as Scotland have finished third ahead of them in Group A with a better goal difference. Scotland, who lost 1-0 to Spain this evening, will now face England in the play-off at Mourneview Park in Lurgan on Thursday (3pm).

The Germans, who had a handful of new faces in their starting eleven compared to their previous two games, took the lead on five minutes when Northern Ireland keeper Perry palmed away a snapshot from Germany midfielder Kristin Kogel to the feet of German striker Klara Buhl and she coolly slotted the ball into the net.

Ten minutes later Germany’s Sarai Linder tricked her way into the Northern Ireland area and had a couple of attempts blocked before the ball spun up to Buhl who headed it just wide.

On 17 minutes Perry produced a great stop to keep out an Annalena Rieke header from close range – and the rebound was met on the half-volley by Germany captain Janina Minge, whose effort went just wide of the upright.

Northern Ireland kept the Germans at bay until the 24th minute when German left back Katja Orschmann burst down the left flank and fired a cross into the box which was neatly side-footed past Perry by Buhl to make it 2-0.

In the 26th minute Northern Ireland winger Abbie Magee broke clear down the right but her shot from distance was easily collected by the German keeper.

A minute later the Germans were three up, with Rieke clipping the ball home from close range after more slick build-up play.

Germany continued to press but the Northern Ireland defence held strong, with centre backs Teresa Burns and Emma McMaster in particular putting in some great blocks.

After a flurry of half-chances for Germany the crowd were given something to cheer by Northern Ireland winger Leyla McFarland who went on a mazy run, and skipped past three German players, but unfortunately the attack petered out.

The last meaningful action of the first half saw German left back Katja Orschmann smash a shot just wide of the post.

Germany stayed on the front foot at the start of the second half with Rieke directing an Anna Gerhardt cross just narrowly wide. Then Perry produced another fine save to keep out a drive from Dina Orschmann.

On 57 minutes the Germans went four up, Rieke playing in Kogel, who slotted the ball past Perry.

Four minutes later it was 5-0 when substitute Caroline Siems bundled the ball over the line from close in.

Perry’s saves count went up again in the 78th minute when she stopped a well-struck Kogel volley from just inside the area and a minute later she made another great save down low from Rieke.

In the 83rd minute Burns produced a superb tackle to prevent Kogel from extending the Germans’ lead. Kogel was about to pull the trigger, after weaving her way towards the box, when Burns stopped her with a great last-ditch intervention.

But on 85 minutes the Germans made it 6-0 when Gerhardt broke clear and slotted the ball past the advancing Perry.

Right at the end a Brenna McPartlan cross was spilled by the German keeper but Northern Ireland substitute Louise McDaniel could not quite get to the loose ball – and that was pretty much the last of the action as Northern Ireland exited the tournament.

The result was a disappointing end to a gritty, hard-working and energy-packed campaign by Alfie Wylie’s team. 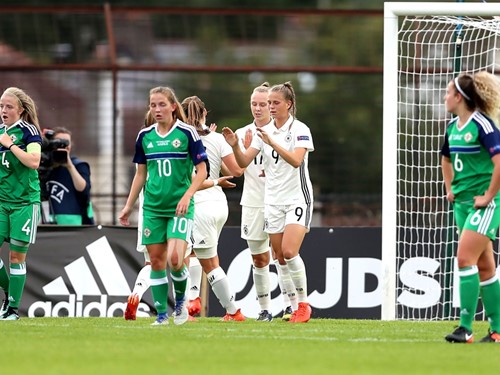 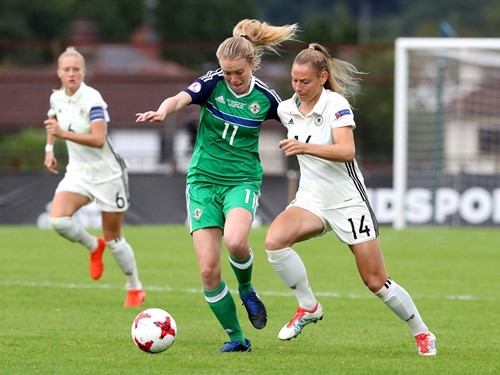 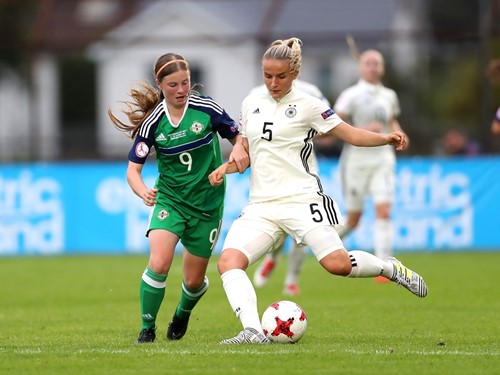 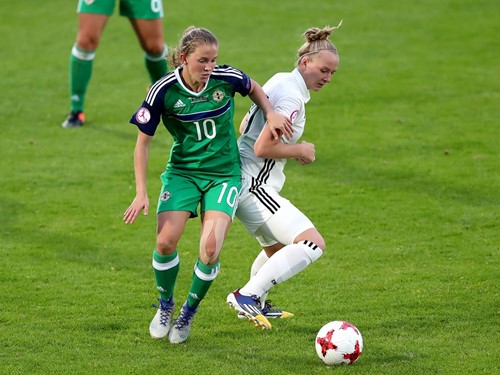 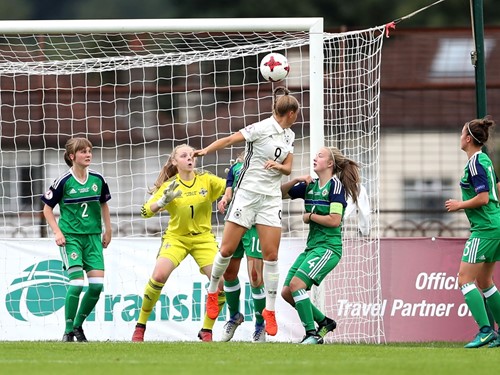