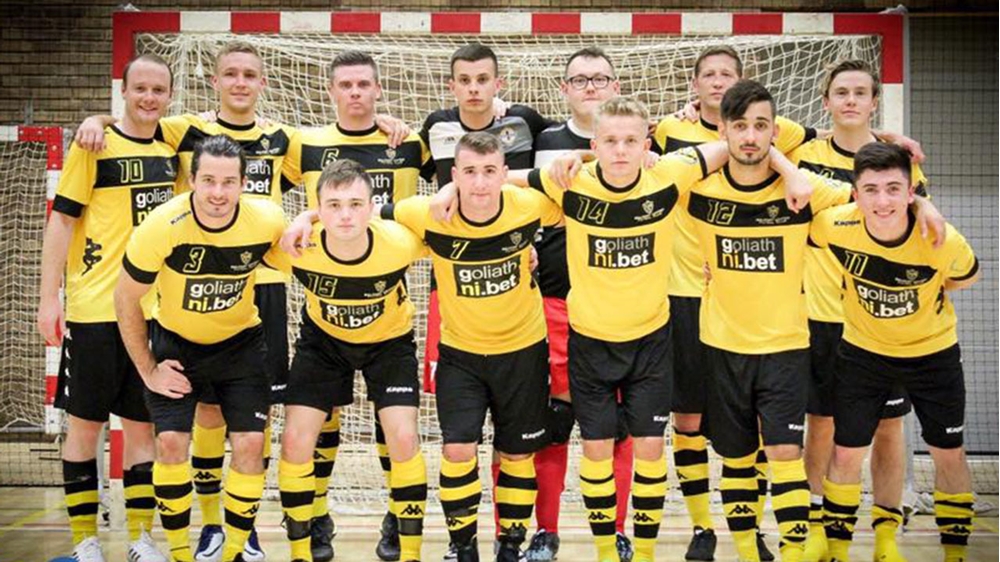 Northern Ireland Futsal Champions Belfast United travelled to Denmark last week to participate in the preliminary round of the UEFA Futsal Cup.

The squad were representing Northern Ireland for the first time in the competition having secured the national title at the end of July.

The club was created just over four months ago and the players involved in the squad are still developing a further understanding of the game but welcomed the challenge to measure themselves against three Champions from other countries in Europe.

The quality of the opposition included the professional side Record Bielsko-Biala from Poland and the semi-professional teams København Futsal from Denmark and Doukas AC from Greece.  This combined with a schedule of three games in four days meant the tactical and physical demand on the team was extensive.

Against Record Bielsko-Biala Belfast United faced an incredibly experienced and well drilled outfit. The constant movement of the players, the creation of space and technical competence highlighted the standard at the professional level.

Belfast United showed tremendous character and spirit to continue to battle in the game and make tactical changes to be more competitive as the game progressed.  The ‘Black and Yellows’ were rewarded with three goals and took the lessons learned from the game and made improvements for the final two matches.

Belfast United’s second game was against the Danish side København Futsal.  In a tight first half Belfast United looked much more organised in defence and extremely dangerous on the counterattack.  Although they were trailing 3-1 at half time, the squad had the belief that they could score more goals and put in a second half performance that would worry the experienced Danish team.

In the second half Belfast United brought the score line back to 8-5 and continued to press forward and be positive.  However, two quick goals from København Futsal and one response from Belfast United meant that at full time the score was 10-6 to the side from Copenhagen. The Belfast side took heart from scoring a further six goals in European competition and also dominating large spells of the game.

The final game was against Doukas AC of Athens, Greece.  Belfast United had studied the opposition in the other matches and were confident that their game plan could help them control larger parts of the match.  The team by their own admission did not perform to their abilities and did not play with the same intensity and tempo as in the previous games.  As a result the team from Belfast were punished and were 5 goals down at half time.

In the second half Belfast United implemented the game plan and looked dangerous in every attack.  A combination of hitting the woodwork and goal line clearances meant that the squad could not affect the score board enough but continued to show promise.

As fatigue set in Belfast United continued to display a never say die spirit and won the second half 2-1 finishing the much stronger.  The final score was a 6-2 defeat to the Greek side but the commitment and improvement of the squad over the three games could not be questioned.

Record Bielsko-Biala showed their class throughout the week winning all three games, beating København Futsal in the final game 6-3. They will now progress to the main round draw of the UEFA Futsal Cup and everyone involved in the Belfast United setup will be keen to watch their progression throughout the competition.

Speaking about the experience Belfast United player Ciaran Donaghy said, “It has been a pleasure and a privilege to represent Northern Ireland in the UEFA Futsal Cup for the first time.

"We knew it would be very difficult from the offset but the knowledge and experience gained this week has been invaluable to both the club, the players and now also hopefully the League in general going forward.

"It is exciting times for Futsal in Northern Ireland and we hope our journey in Europe can act as a catalyst to inspire more Futsal teams to enter for the forthcoming season and help raise the standard of the game here."

The team will now only have a few weeks of rest before they begin their campaign to regards the National title with a new league format being launched in September running to April.

The competition will cater for male players aged 16 and above and matches will be played every other Sunday at venues across the country.  The Irish FA Foundation hope that many more clubs will become involved in the Futsal programme and challenge Belfast United to be the flag bearers in Europe next summer.