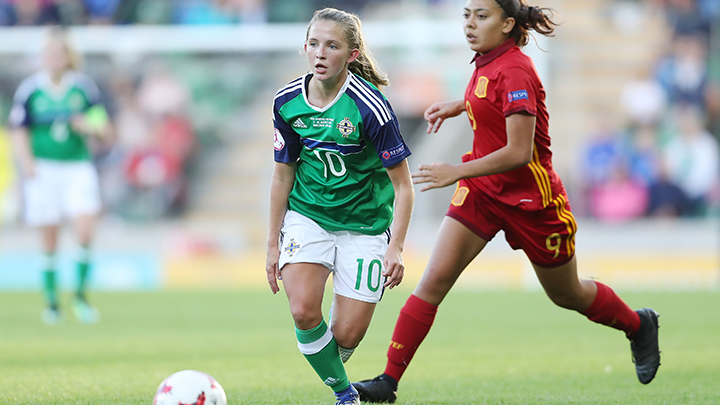 In front of 4289 spectators at the National Football Stadium at Windsor Park this evening - a record attendance for a women’s international in Northern Ireland - the Spanish were simply too strong for the tournament hosts and ran out deserved 2-0 winners.

But there were lots of positives for Northern Ireland. They defended superbly at times and worked hard from back to front.

The skilful Spaniards, who have finished runners-up in each of the past three seasons at the Women’s U19 Euros, pushed forward from the start. In the fourth minute Spanish winger Laura Maria Perez, who had a superb game, missed a gilt-edged chance inside the box.

On seven minutes a surging run from deep by Leyla McFarland had the Northern Ireland fans on their feet for the first time. She eventually forced a corner, but the delivery from it was poor. Then Megan Bell made a great run before the Spanish defence thwarted her.

Northern Ireland’s resistance held out until the 30th minute when another slick Spanish move saw Perez burst into the penalty area down the right and slip the ball to Lucia Garcia to slot home from close range.

Garcia, the highest scorer in qualifying for the tournament with 11 goals, had been well marshalled by Northern Ireland centre backs Teresa Burns and Emma McMaster up until that point.

Spain’s movement and passing was impressive and their two wingers, Perez and Nuria Rabano, were a constant threat.

On 32 minutes Rabano shot over the top after jinking past a couple of defenders and 10 minutes later she had a half-chance but scooped the ball over the top.

After the restart the Spanish continued to push forward and they notched their second in the 53rd minute thanks to a sweet strike from captain Patricia Gujarro. Her volley from 30 yards simply whizzed past Lauren Perry into the top corner.

Three minutes later Spain had another decent chance. This time Damaris Egurrola smashed the ball over the bar when she should have done better.

On 70 minutes winger Perez produced another fine delivery but it was headed over the top.

Northern Ireland’s best move of the game came in the 74th minute. Megan Bell produced a fabulous run from deep, evading several Spanish tackles, before feeding the ball to substitute Abbie Magee, whose stinging shot was palmed away for a corner by Spanish keeper Noelia Ramos.

Spain then created another couple of half-chances but Northern Ireland held them at bay with some resolute defending.