Round up of from our Boys Across The Water 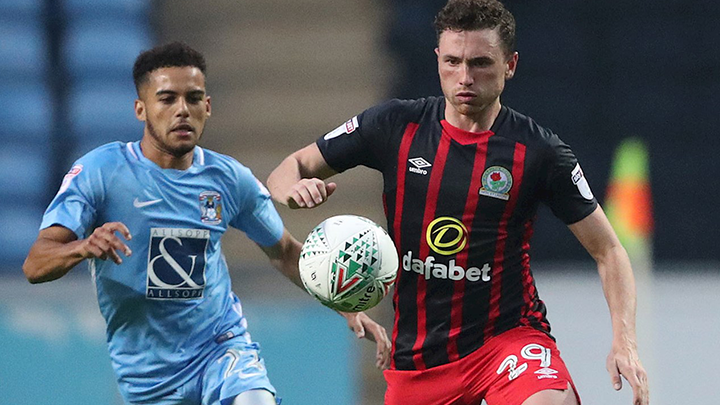 Blackburn Rovers midfielder Corry Evans opened his goalscoring account for the season as the League One side progressed to the second round of the Carabao Cup following their 3-1 victory at Coventry City on Tuesday evening.

The 27-year-old, who was making his first start for the club since December 2016, has endured a miserable time with injuries in 2017 but Rovers boss Tony Mowbray believes he can be a key member of his squad this term.

Mowbray said: “Tonight he showed me that it is very difficult to leave Corry Evans out of the team because of his talent in tight areas, his ability to pick passes, his ability to get around the pitch.

“He missed all of my period at the football club at the end of last season and didn’t play a game; however, you can see how influential he is in our football team.”

The former Northern Ireland under-21 international headed home in the 93rd minute to give the League Two side a memorable 3-2 victory.

“It was a great moment for myself and for the team,” declared Kee, “but I knew it was special for the fans so I wanted to enjoy the moment with them.

“We’ve held our own against a Championship club, it shows just how far we’ve come to see us getting hold of the ball and playing our football against a very good Preston side.”

Also on the scoresheet during the week was Matty Lund who found the net for the first time in a Burton Albion shirt as the Brewers won 3-2 at Oldham Athletic. The latter included Cameron Dummigan and Ryan McLaughlin in their starting eleven.

There were goals too for Danny Lafferty as Sheffield United secured a second round spot with a hard-fought 3-2 success at home to Walsall and for former under-21 midfielder Callum Camps who hit the only goal of the game as Rochdale progressed to the next stage at the expense of Mansfield Town.

Shane Ferguson celebrated his 100th appearance for Millwall by providing an assist for their second goal in the opening round victory over Stevenage who had Northern Ireland youth internationals Dale Gorman and Mark McKee in their line-up.

Winger Stuart Dallas chalked up an assist for Leeds United who had a comfortable 4-1 home success over Port Vale last night while Ben Reeves made his debut for Charlton Athletic who won at Exeter City.

Finally, Portrush-born Conor Mitchell made his debut for Chester FC who drew 1-1 at home to AFC Fylde in the National Conference.

The 21-year-old goalkeeper arrives at the Deva Stadium on-loan from Premier League Burnley until 1 January.