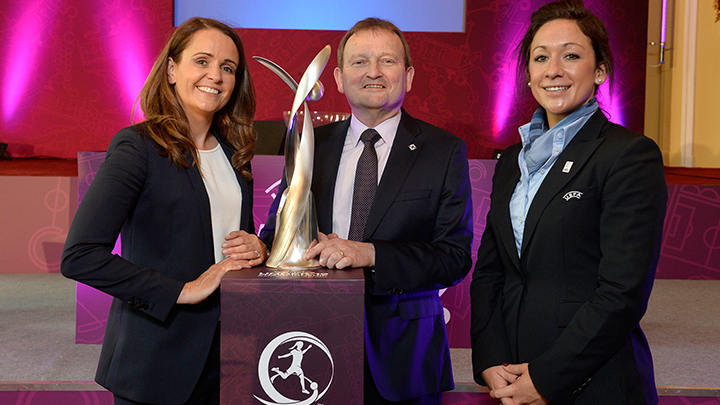 More than 140 of the best young female footballers in Europe will descend on Northern Ireland this weekend ahead of the kick-off of the UEFA Under-19 Women’s Championship.

They will be supported by 150 volunteers and 45 Irish FA staff as well as 70 UEFA officials. The tournament runs from 8-20 August with 12 group games set to be played in four venues across Northern Ireland: The National Football Stadium at Windsor Park, Belfast; Mourneview Park, Lurgan; Ballymena Showgrounds and Shamrock Park, Portadown.

The National Football Stadium will subsequently host the semi-finals and final.

Northern Ireland are set to take on Spain, Germany and Scotland in the group stages, while the other group will see holders France, England, Italy and the Netherlands face each other.

The group games are being staged on 8, 11 and 14 August, while the semi-finals are on 17 August and the final on 20 August. Each squad has 18 players.

A fleet of vehicles will be carrying the teams and officials to and from their hotels to various venues, including 24 cars, eight coaches and even a six-carriage chartered train.

Spain are the only team to have brought their own chef, while England have flown over special protein ice cream and Italy have shipped in Parma ham and Parmesan cheese.

The campaign to host the tournament here began nearly three years ago. An Irish FA Tournament Bid Group submitted a comprehensive bid dossier to UEFA in October 2014 and in January 2015 Northern Ireland was selected as the host country at a UEFA Executive Committee meeting in Switzerland.

Tournament director Sara Booth has been working on the project for the past 18 months, ably backed by other Irish FA staff and a local organising committee.

“As an association we are committed to developing women’s football and we see this tournament as an opportunity to grow the game at a local level and to inspire young boys and girls across Northern Ireland to dream of wearing the green shirt.”

Northern Ireland’s first game of the WU19 Euros will see them take on Spain, last year’s runners-up, at the National Football Stadium at Windsor Park on Tuesday (8 August, 19:00 kick-off). The tournament’s official opening ceremony will be staged before the match.

You can buy tickets for the matches by clicking here, while the full list of fixtures and further information is available here.

IMAGE: Tournament director Sara Booth, Irish FA President David Martin and Nadine Kessler from UEFA look forward to the UEFA Under-19 Women’s Championship, which is being staged in Northern Ireland this month.