Your weekly round up from our 'Boys Across the Water' 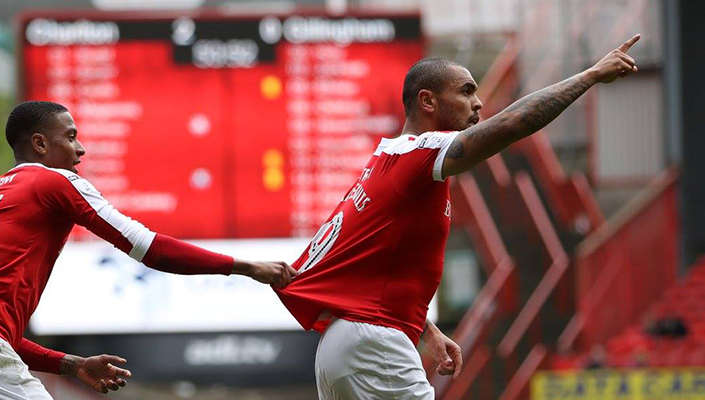 Striker Josh Magennis celebrated the signing of a new two-year contract with Charlton Athletic in style by scoring the opening goal in the Addicks 4-1 home win over Northampton Town at the weekend.

The 27-year-old, who scored his first goal of the season with a header after just two minutes on Saturday, was thrilled to have extended his deal at the Valley until the summer of 2019.

Magennis said: “When I heard the club wanted me to stay, it was a no-brainer for me and I am really happy that we have managed to get it over the line.

“Knowing that the club and the gaffer both really wanted to keep me here and playing in a team that is so competitive and for a club that is ambitious is a big thing for me. It was an easy decision to sign again.

“It was a fantastic win today,” added the former Glentoran player, “I knew with the players that we signed that the chances would be coming and it would be up to me to take them.

“Last week it wasn’t the case, but I managed to grab one today and next week I’m looking for two or three! I know that my teammates will make chances for me, so it’s up to me to take them.”

In the Championship Leeds United winger Stuart Dallas also got off the mark for the new campaign when he came off the bench to score the visitor’s second goal in a 2-0 success at Sunderland.

“Going away anywhere in the Championship and getting three points is a big statement,” said Dallas, “but coming here and doing it - this team have just come down from the Premier League.

“We didn’t just come here to smash and grab. We came here and dominated the game. They had a few half-chances but I thought we looked comfortable.”

Meanwhile, in League Two striker Billy Kee took his tally for the season to three when he hit 92nd-minute winner for Accrington Stanley in their 2-1 victory at home to Mansfield Town.

Elsewhere in the division, Northern Ireland under-21 attacking midfielder Ben Kennedy continued his comeback from injury when he scored for Stevenage five minutes after coming on as a substitute in the 3-1 win over Grimsby Town at the Lamex Stadium.

“It is good to get back on the scoresheet,” the 20-year-old told the official Stevenage site. “But it’s also good to get the first win.

“I live and breathe football, so me being on the pitch makes me smile. I can’t wait to hopefully get that first start of the season and build on it.”

In the Premier League it was a special day for West Brom defender Chris Brunt who marked the 500th appearance of his club career with a 1-0 victory at Burnley on Saturday.

However, the 32-year-old admitted it is an achievement that he probably will not truly appreciate until he has retired.

“The fact that it came in my 500th game is a bonus,” stated Brunt, “It’s probably something I won’t look back on until I’m finished playing and I’ll be proud of it then.

“I suppose not many players get to make 500 so I’m pretty lucky and fortunate to be in the situation that I am - in the Premier League as well - I’m delighted.”

Also in the Premier League Steven Davis earned Southampton a first-half penalty, which was duly converted,  as the Saints condemned West Ham United to a second straight defeat following a 3-2 win at St Mary’s Stadium.

Burton boss Nigel Clough said: “He might have a nasty ankle injury which will be another blow. The play had already stopped and the lad stepped over him and caught him, there was no intent there, but he couldn’t walk off so that’s not a good sign.”