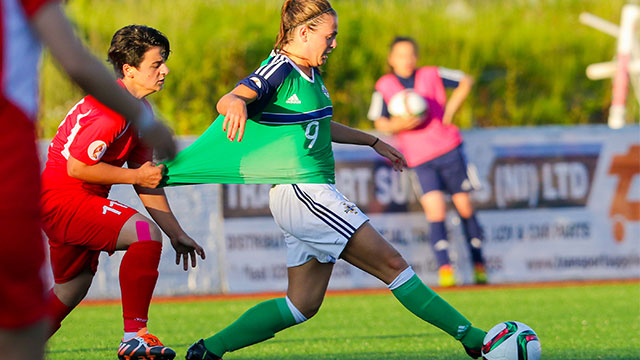 Alfie Wylie's side then bring their campaign to a close next Tuesday with a visit to Switzerland.

It is a tough finish to the series given that both the Azzure and the Swiss are among the top 20 nations in the world and are battling hard to secure top spot in the group and with it a place in the finals next year in the Netherlands.

Managed by footballing legend and World Cup winner Antonio Cabrini, Italy defeated Northern Ireland 3-1 in the first meeting between the sides in Reggio Emilia back in April.

However, that win for the Italians only came after a flurry of late goals. Northern Ireland had held the advantage going into the closing 20 minutes thanks to a Simone Magill strike.

It just wasn't to be that night but Wylie's side do go into tomorrow’s game on the back of an encouraging run of results that have brought victories this year over Croatia and Georgia plus a draw with the Czech Republic early last month.

And Wylie will be using the frustrations of that defeat in Italy to spur his side on ahead of tomorrow’s rematch.

He said: "We sat dejected and gutted in the dressing room after losing to Italy. I told the girls to harness and use those feelings to their advantage, which they did by putting four past Georgia in the next game.

"I'll be reminding them again of those feelings before tomorrow’s game but I also know they'll give it their all. Nothing will be left behind. They'll play to their limits and will continue to make progress."

Remember, as always, admission tomorrow night is free so why not come down to cheer the girls on?