Goals galore ahead of squad announcement 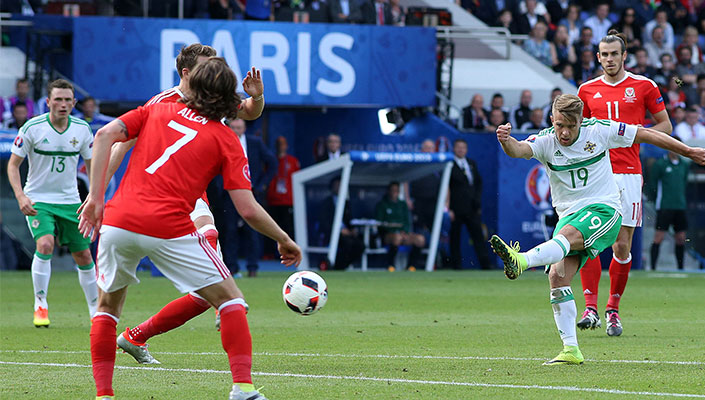 Striker Will Grigg ended his mini goal drought by firing home his first goal in four games to give Wigan Athletic all three points at home to Wolves on Tuesday evening.

The 25-year-old, who had been left out of the starting line-up by Latics manager Gary Caldwell for the first time this season, came off the bench to coolly slot home the winner two minutes from time to take his tally for the campaign to six.

“I spoke to Will before I named the team,” explained Caldwell, “and it’s one of the hardest parts of the job for me, telling a player who works extremely hard all week - and one who’s done as well as he has - that he’s not going to start.

“He took it on the chin, I said I would need him to come on and play his part, and he did that fantastically well.

“I just felt Will looked a little bit jaded in the last few games, he didn’t look his normal sharp self,” he added. “His girlfriend has just had a baby, and obviously with all that emotion, and the different things that go along with that, I thought it was the night to give him a rest.

“For him to have started all three games this week would have been difficult, and I just thought it was the night to freshen things up.

“Sometimes it works, sometimes it doesn’t, and when it works you take it.”

Elsewhere in the Championship Jamie Ward got off the mark for Burton Albion when he headed home his first goal since joining the club on-loan in the 1-1 home draw with Queens Park Rangers who had Conor Washington back in the starting line-up.

In League One Josh Magennis recorded his second goal of the season in the 1-1 home draw with Oldham Athletic who had Northern Ireland under-21Cameron Dummigan defender making his debut for the Lancashire outfit.

Despite getting his name on the scoresheet Magennis admitted it was the worst performance by the club since he arrived at the Valley in the summer from Kilmarnock.

“That’s probably the worst we’ve been since I’ve been here,” declared the 26-year-old, “with the ball and without it. Not individually – just collectively. We weren’t at it.

“We came into the game with a lot of confidence and scored the first goal but then conceded so late it feels like a defeat.

“We’ve got to take the positives. I’m an optimist,” he added, “We didn’t play to the best of our ability but still got a point.

“It’s up to us to put it right against Rochdale on Saturday and show the fans who pay their hard-earned money that we’re a formidable force in this league.”

Also among the goals last night was Martin Paterson who made it two in two games as Port Vale won 3-1 at home to Millwall, while midfielder Ben Reeves scored his second of the season as MK Dons slumped to a 3-1 home defeat to Bury.

In the Championship Corry Evans made his 100th appearance for Blackburn Rovers but the celebrations were muted for the midfielder as his side lost by a single goal at Ewood Park to Sheffield Wednesday.

Finally, former Northern Ireland ‘B’ and under-21 international Robbie Weir was sent-off after just 20 seconds of Leyton Orient’s contest with League Two leaders Plymouth Argyle. The London-outfit eventually lost 2-0 and finished the game with just nine men on the pitch.