Boys across the water - September 17 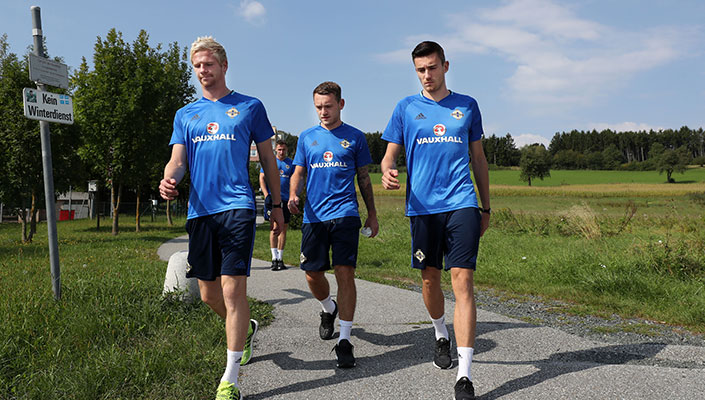 Midfielder Matthew Lund scored his second of the season after Rochdale clocked up their first victory of the campaign with a 2-1 home win over Fleetwood Town in League One.

The 25-year-old central midfielder, who earned a call-up into Michael O’Neill’s senior squad for the game with the Czech Republic last month, admitted it was a relief to have finally got their first league win under their belts: “We (the players) are excited to have got the three points,” declared Lund.

“because the lads battled really hard today. We’ve not had that feeling since the final day of last season so it was good to get the three points.

“We can now concentrate on getting up the table and getting back to where we should be. I know we’re a lot better than the table suggests at the moment.

“That’s my second goal of the season so it was good to get on the score-sheet again. I’m happy to be scoring and playing.”

Northern Ireland under-21 defender Jamie Sendles-White had to be stretchered off after sustaining a knee injury in Swindon Town’s 2-1 home defeat to Bury at the weekend.

The 22-year-old, who signed a one-year deal with the League One club in the summer, clutched his knee and writhed in pain after he collided with Burys’ Tom Pope just 27 minutes into the game.

“Initially, it looks like it could be a ligament problem,” said Swindon boss Luke Williams. “If it is it would be significant enough to keep Jamie out of the squad for a number of weeks.”

The only other Northern Ireland player to find the net over the weekend was striker James Gray who scored for Southport in their 1-1 home draw with Aldershot in the National Conference.

Striker Liam Boyce was named the Scottish Premiership’s Player of the Month for August after scoring five goals in four outings for Ross County last month.

Unfortunately, the former Cliftonville man could not celebrate his award on the pitch on Saturday as he suffered a back spasm in the pre-match warm for County’s visit to Rangers which ended in a scoreless draw.

Meanwhile in the Championship Corry Evans made it two assists in two games after helping Blackburn Rovers to their first league success of the season with a 4-2 victory over Rotherham United at Ewood Park.

Finally, in the Premier League defensive duo Gareth McAuley and Jonny Evans were part of the West Brom team that defeated West Ham 4-2 at the Hawthorns, while Watford’s Craig Cathcart and Southampton’s Steven Davis also enjoyed success after their team’s victories over Manchester United and Swansea City respectively.