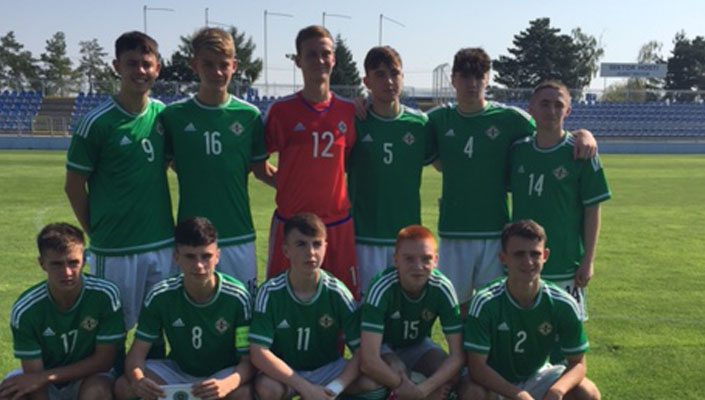 The Northern Ireland U16 team maintained their unbeaten start to the season earlier today. A superb effort from team captain Jordan McEneff helped to secure a 1-1 draw against Slovakia in an international challenge match played at the TNC Stadium in Senec.

Northern Ireland, who also drew one-all with Slovakia on Tuesday, started brightly and the game was evenly contested in the opening period. In the 17th minute striker Callum Ferris just failed to connect with a great pass from Dean Corrigan and the Slovak keeper was quickly off his line to avert the danger.

Shortly afterwards Ferris did test the keeper with a rising shot which was well held. Slovakia then missed a great chance to break the deadlock but Michal Dopater shot straight at Scott Pengelly with only the keeper to beat.

Two minutes after the restart Dominik Bindics opened the scoring, running onto a pass from Patrik Myslovic to beat Pengelly with a low drive into the corner of the net. The lead proved to be shortlived as Jordan McEneff equalised with a brilliant effort five minutes later.

The Northern Ireland captain won the ball in midfield and advanced 10 yards before planting a left foot shot into the roof of the net from long range. Northern Ireland went close to snatching victory in the closing stages but Barney McKeown headed against a defender when well placed and Lee O'Brien saw a 25-yard piledriver deflected past the post.

The Schoolboys team will be hoping to maintain their unbeaten run when they face Finland at Comber next Monday (6pm kick-off) and again at Knockbreda next Wednesday (11am start).