Boys across the water - September 26 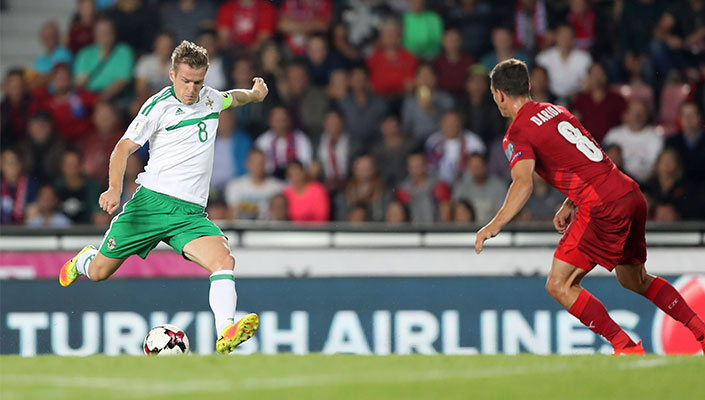 Captain Steven Davis played a pivotal role in Southampton's 3-0 hammering of West Ham United with an assist to seal the points.

The midfielder played in James Ward-Prowse for the third after a driving run and pulled back to Prowse to seal their fourth win in a row in all competitions.

The Cullybackey man was also near to having his name on the scoresheet but after a run in the area, he was unable to avoid a block from defender Håvard Nordtveit.

Elsewhere, striker Martin Paterson ended his two-and-a-half-year spell without a goal when he scored his first for Port Vale in their 2-1 defeat at Bristol Rovers in League One at the weekend.

The last time the 29-year-old found the net was on 22nd March 2014 against Colchester United whilst on-loan with Bristol City, though he admitted it was not something that had been praying on his mind.

“Within those two years I don’t think there were a lot of starts or a lot of games, so it doesn’t really hurt me too much,” said Paterson, who arrived at Vale Park in the summer after being released by Blackpool. “I make no bones about it, I am here to work hard, play as many games as I can and score as many goals as I can.”

The former Stoke City and Burnley forward, who won his last International cap against Cyprus in March 2014, believes if he can stay fit then he still has a lot to offer and will only improve as the season continues.

“If you ask me honestly I wouldn’t say I am at my best,” he added, “I still think there’s a lot more to come, there really is.

Also on the scoresheet at the weekend was former Under-21 striker Billy Kee whose fourth goal of the campaign helped Accrington Stanley to a 2-1 success at Colchester United in League Two.

In the National Conference Matthew McClure was among the goalscorers as Aldershot recorded a seventh win on the bounce while current under-21 midfielder Liam Nolan secured all three points for Southport with the only goal of the game at North Ferriby United.

Meanwhile, defender Tom Flanagan, who was called up into the senior International squad for the first time last month, was red-carded in the 76th minute of Burton Albion’s 3-1 defeat at Championship leaders Norwich City.

Also seeing red at the weekend were Joe Jones who was dismissed in injury time after giving away a penalty in Woking’s 3-1 defeat at Tranmere Rovers and Richhill-born Daryl Smylie who was sent-off for the second time this season for Swedish side Jönköpings Södra IF who lost 1-0 at home to Kalmar.

Finally, in the Premier League, Paddy McNair had to be content with a place on the Sunderland bench despite his two-goal salvo for the Black Cats in the EFL Cup in midweek; he did though come on for the final four minutes of the 3-2 home defeat to Crystal Palace.

While Garth McAuley and Jonny Evans helped West Brom to a point at Stoke City in what was Tony Pulis’ 1,000th game as a manager.