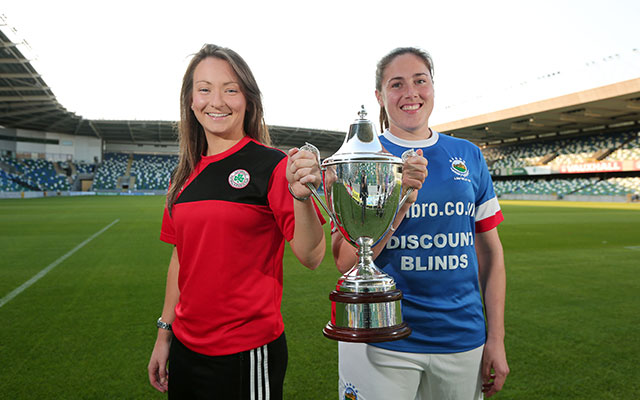 Cliftonville Ladies will be determined to hold on to the trophy when they face league champions Linfield Ladies in the final of the Irish FA Women's Challenge Cup on Friday night (23 September).

For Linfield the game at the National Football Stadium at Windsor Park (7.45 kick-off) marks another step in their remarkable quest to complete the domestic clean sweep.

Having clinched the league title with relative ease, the Blues then claimed the Co Antrim FA Women’s Cup and just a few days after the Irish Cup decider they will be taking the field in the NIFL League Cup Final.

But holders Cliftonville won't be relinquishing their crown easily. The Reds finished runners-up in the league and lost by the odd goal in seven in the Co Antrim final so they have a score to settle with the so far all-conquering Blues.

Indeed their determination to hold on to the cup was demonstrated in abundance by a Celine Curtis inspired semi-final thumping of Derry City Ladies.

The 19-year-old bagged four goals in a 6-0 victory at Mill Meadow in Castledawson while, in the previous round, she picked up the 'player of the match' accolade in the quarter-final defeat of north Belfast neighbours Crusaders Strikers.

Cliftonville can also boast the influential Marissa Callaghan among their ranks. Recently appointed to the role of Ambassador for Women's Football in Northern Ireland, the midfielder has also donned the captain's armband for the national team during the just finished European Championship qualifiers.

But Linfield will be the toughest of nuts to crack. The Blues swept aside allcomers in a blistering league campaign, dropping just five points on their way to their first ever NIFL Women's Premiership title - and in Kirsty McGuinness they possess a deadly threat in front of goal.

The 21-year-old hit three or more goals in no fewer than five games, the sort of form that earned a call-up to the senior international ranks alongside team-mates Ashley Hutton and Lauren Robson.

And just as Cliftonville had their semi-final hat-trick hero so did Linfield in 15-year-old Megan Bell who bagged all three goals in the last four defeat of outgoing league champions Newry City Ladies at Stangmore Park in Dungannon.

Tickets for Friday night’s game cost just £5 for adults or £3 concessions and are available to buy here.