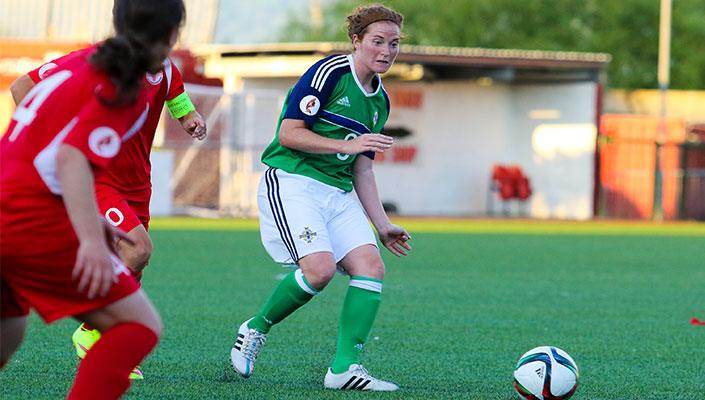 Northern Ireland women's captain Marissa Callaghan says the mindset of the national side has changed thanks to a positive UEFA Euro2017 qualifying campaign.

Ahead of their final UEFA Euro2017 qualifier against Switzerland on September 20 at 7:45pm, Callaghan reflected on a campaign full of improvement with many memorable highlights.

The Cliftonville midfielder had a campaign to remember with constant performances and was handed the armband in her home stadium of Solitude against Georgia scoring twice in a 4-0 win.

But at the start of this campaign, the side came in off the back of a tough World Cup run where they only scored one goal which came in their final game.

However, they started their Euro qualifiers with an emphatic 3-0 win away to Georgia: "It was fantastic, it wasn't just the win, it was scoring the three goals and creating lots of opportunities. It was what we missed in the World Cup campaign."

And looking back over memorable moments such as leading in Italy and setting a world record of 11 seconds for the fastest ever women's international goal, Callaghan now feels their approach has changed and has brought more self belief, she said: "To sum up the campaign would be that we have drawn a lot of confidence out of each other.

"We trust each other as a team and we aren't all about defending, we are going out there in a positive way trying to score goals. All together, we have a great team."

The Women still have a chance of finishing third in their group, but will have to rely on others for that feat to happen.