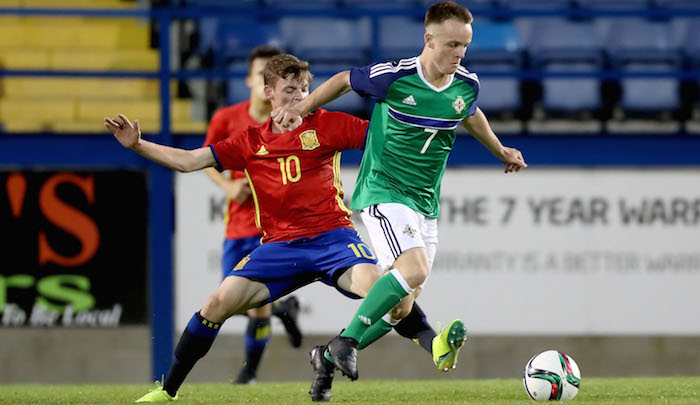 Northern Ireland began their Under-17 European Championship Qualifying Round tonight with a 4-0 loss to Spain at Mourneview Park.

Stephen Frail’s young side were up against formidable opposition in their opening match as they faced a Spanish side littered with young talent from Barcelona, Valencia and Real Madrid.

The Spaniards didn’t take long to make their mark on the match as they took the lead on four minutes. Winger Diego Valera Pampin rose above the Northern Irish defence to head in at the back post from a Ferran Torres cross from the right wing.

Only 90 seconds later the Spanish scorer turned provider for his captain as Valera Pampin put a low dangerous ball into the box which was met with a neat finish from Barcelona’s Abel Ruiz past Rory Brown in the Northern Irish goal.

The first half saw some commanding goalkeeping from Brown who did well to dominate his area as the Spanish continued to put crosses into the box.

Northern Ireland suffered a further blow on 25 minutes as midfielder Caolan Boyd Munce went off on a stretcher to be replaced by Ethan Galbraith.

Northern Ireland had a good chance to pull one back on the 36th minute as Maurice Chambers put a dangerous free kick into the area which the Spanish failed to clear. The ball fell nicely to striker Josh Tipping who dragged his volley just wide of the Spanish goal.

Frail used his remaining substitutions at half time as Brown was replaced by Tiernan Parker in the Northern Ireland goal and Caolin Coyle was replaced by Alfie McCalmont.

The second half started brighter for Northern Ireland as Galbraith, McCalmont and Luke Ferguson pressed the Spanish midfield looking for possession.

The Spaniards were kept at bay early on in the half with some solid defending by Jack O’Mahony and Adam McAleenan as Galbraith and Reece McGinley tried to find a way through the Spanish defence.

The Spanish increased their lead to 3-0 on 58 minutes as an impressive rabona by Ruiz found Torres in the box who cut the ball back for Real Madrid’s Sergio Gómez Martin who finished high past Parker in the Northern Ireland goal.

Northern Ireland looked to pull one back on 65 minutes as they did well to create space in the box on 65 minutes but Tipping was robbed of the ball just as he was about to pull the trigger.

Spain made it 4-0 on 70 minutes as McAleenan was awarded an own goal when the ball took a touch off him as a free-kick was played into the box from Moukhliss Agmir.

Northern Ireland were unlucky late on as winger Chambers went close as his shot from distance skimmed the top of the bar on the stroke of full-time.

Frail’s side face tough opposition in their second match of the mini-tournament as they play Slovakia at Seaview in Belfast on Wednesday at 7.30pm, with their final game against San Marino at Mourneview Park in Lurgan at 3pm on Saturday.

Entry to all matches in the qualifying group are free of charge.

The top two teams from the group, along with the five third-placed sides with the best record against the leading pair in their groups, will progress to the elite round stage.