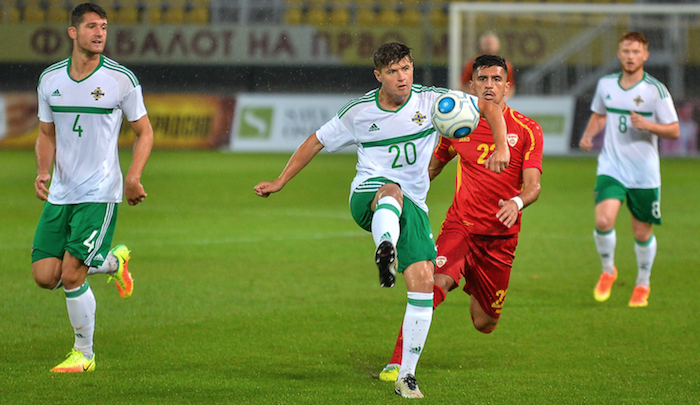 This evening the Northern Ireland U21 team were defeated by Macedonia in Skopje.

Macedonia took the points in a 2-0 win over Jim Magilton’s Northern Ireland side on a rainy evening in Skopje. An own goal from Josh Doherty in the first half was followed up by Kire Markoski's strike late in the second half.

Both teams worked hard to make their mark on the match early on as torrential rain came down at the National Arena Filip II in Skopje.

An early penalty shout for Macedonia was waved away by the referee as the home side tried to take control of the match.

Cameron Dummigan and Dion Charles proved to be solid in defence and dangerous in attack in the first half as they combined well down the right wing but couldn’t find the decisive pass for Shayne Lavery up front.

Northern Ireland had their own shout for a penalty as Lavery found himself one on one with the goalkeeper on 21 minutes. The young striker went down as he took the ball past the keeper and was unlucky as the referee blew his whistle for a free kick and showed him a yellow card for diving.

Jim Magilton’s team pressed the ball well. Mark Sykes stole it from the Macedonian defence on 18 minutes but was unfortunate when his pass was just too heavy for Lavery who had made a good run in behind.

The best chance of the half fell to Lavery on 34 minutes as he made a driving run into the box and did well to get his shot on target. Aleksovski in the Macedonia goal got down at the near post to keep the score level.

Not long after Macedonia were celebrating. On 38 minutes an own goal from Josh Doherty put the home side 1-0 up. A cross from the left wing landed deep inside the Northern Ireland box and Doherty misplaced his clearance which flew past Mitchell into his own net.

The start of the second half didn’t see any clear chances for either side as Magilton’s team looked to level the match. Macedonia almost got lucky when a free-kick from 30 yards out took a nasty bounce in front of Mitchell who did well to get his body in the way.

As the second half progressed the match opened up, with chances coming at both ends. The Northern Ireland team soaked up pressure from the home side as clearances from Doherty, Dummigan and Sendles-White kept the Macedonians at bay.

Northern Ireland substitute Gavin Whyte did well on the counter attack as he went straight up the other end and saw his effort from inside the area go just off target.

The match was put out of reach on 85 minutes as a misplaced pass in the Northern Ireland midfield allowed the home side to go 2-0 up. The Northern Ireland defence was stretched as Markoski made a driving run into the box and finished low past Mitchell.

Manager Jim Magilton shared his thoughts after the game. He said: “I’m disappointed and frustrated at the result tonight. I think those key moments in the game have summed up our campaign. We were very good for large periods, managed the game very well and technically I thought we were spot on.

“On a night where we were playing in very difficult conditions it was probably an even match, but their little bit of quality was the difference with a good ball into the box and an unfortunate own goal.”