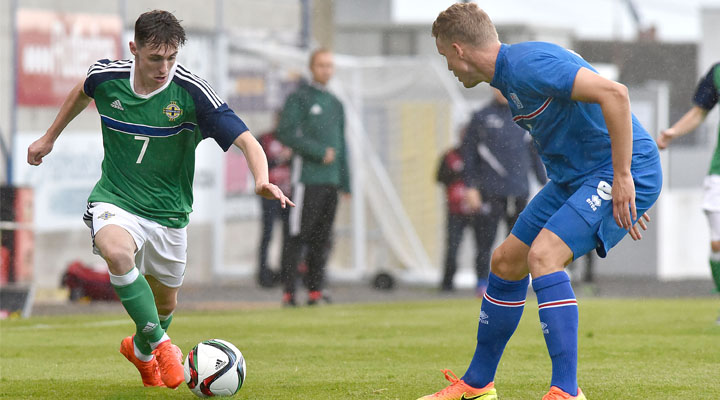 Northern Ireland U21s were unlucky to lose 1-0 in their UEFA European Championship qualifier against Iceland tonight at Mourneview Park.

An 88th minute winner from Heidar Aegisson was the difference as Jim Magilton’s side will feel they should have taken something from the game.

Both sides had their fair share of possession early in the first half as Northern Ireland looked to take control with neat play by Jordan Thompson in midfield and solid defending from Cameron Dummigan at the back.

Northern Ireland’s first chance of the game came on 18 minutes as the ball fell to Shayne Lavery from a long range free kick played into the box by Dummigan.

Lavery made a good run in behind the defence and caught the ball well on the volley but unfortunately it went straight into the arms of Runarsson in the Iceland goal.

A good spell of possession for Northern Ireland mid-way through the first half resulted in a free kick 25 yards out from goal. Jordan Thompson was the man to take the set piece which went over the bar much to the delight of the Icelandic goalkeeper.

This signalled a positive period for Jim Magilton’s side as Gavin Whyte, Thompson and Lavery were looking very dangerous in the opposition half.

The best chance of the half fell to Lavery on 35 minutes.Gavin Whyte out muscled Iceland’s Hermannsson and retrieved the ball well down the right hand side. He played an accurate pass to Shayne Lavery who’s first-time effort went just over the bar.

Iceland finished the half stronger as Omarsson went close after some tidy play in the Northern Ireland box but Conor Mitchell did to keep the ball out of the net making a double save from very close range to put the ball behind for a corner.

The second half didn’t see as many chances for either side, until the deadlock was broken on 88 minutes.

Northern Ireland looked to be taking control of the half as a ball into the box from Gorman was well gathered by Runarsson in the Iceland goal as Dion Charles looked to creep in at the far post.

Northern Ireland were unlucky not to take the lead on 80 minutes as substitute Louis Rooney ran in behind the defence and got a shot on goal which was scrambled clear by the goalkeeper.

The winner came two minutes from time as Iceland broke well down the right and some neat passing in the Northern Ireland box resulted in a shot into the top left-hand corner from Heidar Aegisson which Mitchell had no chance of stopping.

After the match manager Jim Magilton was disappointed not to get anything from the match. “We knew we going to face a very difficult challenge. Iceland have been excellent in the group and have some good individual players.

“I thought both teams battled very well and we had spells in the game where we were in control. But it’s a cruel game and if you don’t take those half chances it comes back to bite you.”

Jim Magilton’s team will be looking to turn their fortunes around in their next match away to Macedonia on Tuesday evening.