Boys Across the Water - September 12 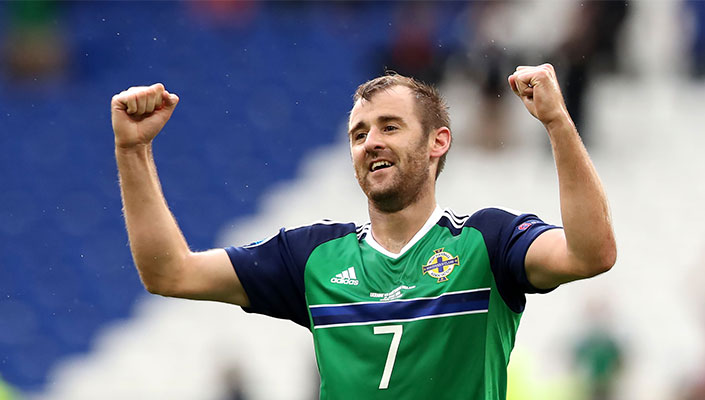 Aberdeen winger Niall McGinn was pleased to have clocked up his 50th league goal for the club at the weekend but admitted he was also left frustrated after the Dons could only manage to pick up a point in the 1-1 draw at home to Inverness.

The Donaghmore man gave his side the lead early in the second-half but in the end had to be content with a draw in a game McGinn believes they could, and should, have won.

“Personally, I was delighted to see the ball hit the net,” declared the 29 year-old, “I am pleased with my start to the season, that is my fourth goal.

“It’s a great milestone to have hit my 50th league goal in my fifth season but the most important thing was winning the three points and we are very disappointed we did not do that.

“We showed in the first 10 minutes of the second half just what a good side we can be, we created chances and once the first goal goes in you think it’s all going to plan.

“On the park we need to be doing more to kill teams off,” he added, “We need to be taking more of our chances. We will continue to work on things behind the scenes and the performances will come and more importantly so will the results.”

Meanwhile in League One in England Josh Magennis opened his goalscoring account for Charlton Athletic after heading home a 32nd minute equaliser in the 2-2 draw at Fleetwood Town on Saturday.

Striker Will Grigg was also on the scoresheet again for Wigan when he ‘fired’ home his fifth goal in seven outings this season, but it was not enough to prevent the Latics going down 2-1 at Sheffield Wednesday.

“I’ve said before that Will can score at any level at any time,” remarked Wigan boss Gary Caldwell. “He is a goalscorer, and his general play was also fantastic.

“He does so much more than score goals - his work for the team was incredible.”

Another striker in good early season form is Ross County’s Liam Boyce who made it six goals in his last four games for the Scottish Premiership side after finding the net in the home draw with Motherwell.

In the National Conference former Newcastle United trainee Paddy McLaughlin got his first goal of the season as Gateshead won 4-1 at Braintree Town while elsewhere in the division James Gray earned Southport a point at Eastleigh, his first goal since joining the club in the summer.

Portadown-born midfielder Daryl Smylie took his tally to six for the campaign when he scored a consolation goal for Swedish First Division outfit Jongkopings Sodra IF who were beaten 5-1 at Norrkoping.

Finally, International manager Michael O’Neill received a boost after midfielder Corry Evans came off the bench to make his first appearance of the season for Blackburn Rovers at Queens Park Rangers, while on-loan winger Jamie Ward made his debut for Burton Albion in the 1-1 draw at Wolves.