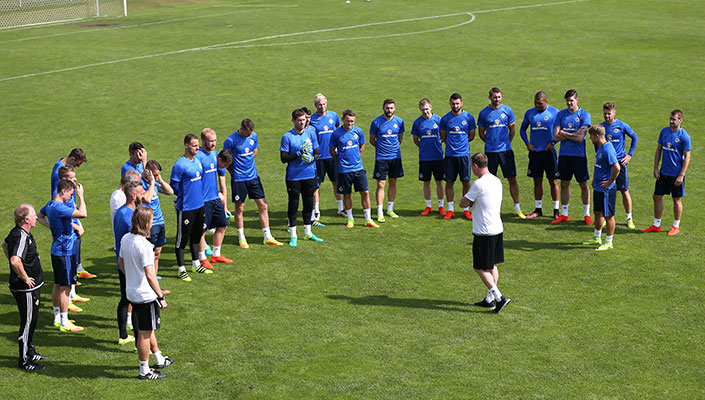 It's a tough start for Michael O'Neill's side against a fellow Euro 2016 finalist, albeit one that experienced a disappointing tournament with just a draw to show for their endeavours - and that was courtesy of a 93rd minute penalty.

As well as having a new manager in the shape of Karel Jarolím, the Czech Republic have suffered the loss through retirement of no fewer than five members of the squad they took to France, among them goalkeeper Petr Čech, capped a record 124 times, and midfield man Jaroslav Plašil, who clocked up 103 appearances.

That, of course, makes way for a new breed of stars, among them Hoffenheim’s Pavel Kadeřábek, an attacking right-back possessing a good physical presence. He made his name during the 2015 UEFA Under-21 Championships and has scored twice in 21 senior international appearances.

Also plying his trade in the Bundesliga is Vladimír Darida, an industrious midfielder who also has an attacking role. Currently appearing for Hertha Berlin, he has been linked with a move to Real Madrid.

Hertha boss Michael Preetz has described the 25-year-old as the "heart and lungs" of his team. He has a penchant for scoring from distance and indeed it was his maiden goal for the Czech Republic that secured their place in France when he collected the ball some 20 yards from goal before unleashing a spectacular right-foot effort into the top corner against Latvia.

Up front new boss Jarolim will be looking to Tomáš Necid to add to his 12 goals. Now playing for Bursaspor in Turkey, Necid scored twice in the build-up to France and grabbed another in the tournament itself.

He should be partnered in attack by Slavia Prague’s Milan Škoda. A late arrival to international football, the 30-year-old has gone on to bag four goals in just 11 appearances since making his debut in June 2015.

Then there’s Tomáš Rosický, who recently signed for Sparta Prague from Arsenal. The 35-year-old talisman and skipper of the national team will be ignored at Northern Ireland's peril.

Given the moniker ‘The Little Mozart’ for his ability to orchestrate things from midfield, Rosický picked up a thigh injury in France which curtailed his involvement in the finals.

Northern Ireland approach the match and indeed the qualifiers without the steadying influence of Chris Baird after his recent retirement from the international stage but O'Neill will be buoyed by Gareth McAuley's decision to carry on at this level, and with two goals in recent outings for West Bromwich Albion it's easy to see what a boost that news is.

Further encouragement comes with Kyle Lafferty's goal and assist for Norwich City in their recent League Cup thumping of Coventry City while Liam Boyce, recalled to the squad, has been in fine scoring form for Ross County.

O'Neill has named two uncapped players in his panel, Callum Morris and Matthew Lund. Michael Smith, who just missed the Euros cut, is another player back in contention along with Ryan McGivern.

The nations last met back in the 2010 World Cup qualifying campaign, both games ending scoreless. Prior to that the Czech Republic defeated Northern Ireland twice in the space of three months in 2001.

But, of course, no mention of any game against Czech Republic can be made without referring to the 1958 World Cup finals when Peter Doherty's legendary side reached the quarter-finals in Sweden, defeating the then Czechoslovakia twice along the way.

Star from the Past

Arguably the biggest legend in Czech football is Karel Poborský. He clocked up 118 caps and eight goals in an international career spanning 12 years from 1994 until his retirement a decade ago.

Perhaps his finest moment came during Euro 96 when he scored what became known as the ‘Poborský Lob’ after he chipped and lifted the ball over advancing Portugal goalkeeper Vitor Baia in the quarter-finals.

Domestically Poborský started and finished with the same Czech club, Dynamo České Budějovice, and enjoyed eventful spells with Manchester United, Benfica and Lazio along the way.