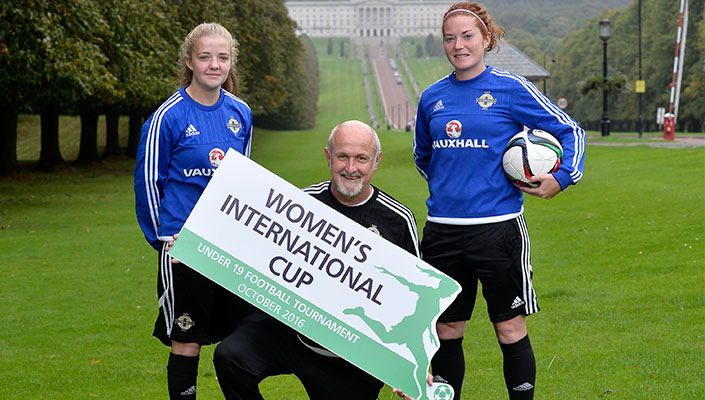 Northern Ireland will warm up for next summer’s UEFA Under-19 Women’s Championship by hosting a mini-tournament across four venues next month.

The Women’s International Cup will feature three of the powerhouses of the women’s game - USA, England and France - alongside Northern Ireland.

The round-robin games will be staged at Ballymena Showgrounds, Mourneview Park in Lurgan, Portadown’s Shamrock Park and at the National Football Stadium at Windsor Park in Belfast.

Irish FA National Women’s Coach Alfie Wylie said: “This is a fantastic opportunity for our players to play against some of the best teams in the world.

"We only have to look at the track records of all three teams to understand the calibre of their player development pathways to consistently produce talented players year on year.”

Alfie added: “France are the current UEFA Women’s U19 champions, having recently secured the title in Slovakia, while the England women’s national team did exceptionally well at the Women’s World Cup in 2015 with Mark Sampson’s side collecting the bronze medal. I have no doubt that the England U19 team will come to Northern Ireland with extremely high expectations.”

Both England and France have qualified for the UEFA Women’s Under-19 Championship Finals 11 times, with France winning the overall title on four occasions and England winning it once.

The National Women’s Coach further said: “These three teams will undoubtedly be formidable opponents. It will be a great challenge to play them and we are very much looking forward to learning from the experience.

"It is still very early in our preparations in advance of next year’s UEFA Championship Finals but it will be an excellent opportunity to show our players what they should expect in August 2017.”

Fixtures for the Women’s International Cup are as follows:

Tickets for the tournament are going on sale via Ticketmaster tomorrow (15 September). They cost £5 for adults and £3 for children (aged under 16).

The Irish FA will also be providing 1000 free community tickets for schools and clubs per match, with a limit of 30 per match per group.