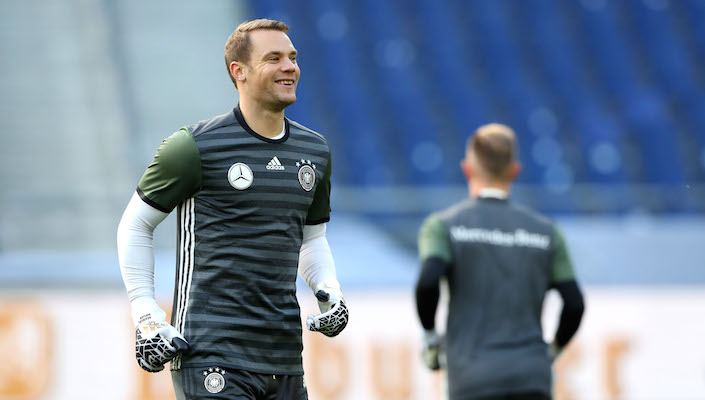 Several stars of the future were in the thick of the action when Northern Ireland last hosted a major UEFA tournament.

The Women’s Under-19 Championship is coming to town this August – and we can expect to see plenty of emerging talent if the last tournament staged here is anything to go by.

The French won their first ever UEFA European Under-19 Championship when Northern Ireland hosted the men’s version of the finals back in 2005.

Tottenham Hotspur keeper Hugo Lloris, rated as one of the world’s top goalies, was part of the French team which picked up the winner’s trophy.

And Bayern Munich star Manuel Neuer, viewed by many as the world’s best stopper, was part of the Germany squad at that tournament.

There were several other familiar names among the various squads - England, Norway, Armenia, Serbia, Greece and Northern Ireland also competed - who have gone on to play at the highest level as well as for their respective countries.

France defeated England 3-1 in the final at Windsor Park, with their goals coming from Mohamed Chakouri, Abdoulaye Balde and Yoan Gouffran.

Gouffran stars on the wing for Newcastle United in the Championship these days, after spells with Caen and Bordeaux, but his fellow goalscorers have not fared as well.

Balde, the 2005 tournament’s golden player, is now playing lower league football in France despite a promising start to his career with Amiens, while Chakouri is also operating in the lower leagues in France after spending several seasons with French Ligue 1 side Montpellier and Belgian outfit Charleroi.

However, most of that victorious French squad have carved out careers at the highest level. Among their number were Crystal Palace midfielder Yohan Cabaye (ex Paris Saint-Germain and Newcastle), Watford defender Younes Kaboul (ex Spurs and Sunderland) and midfielder Yoann Gourcuff (ex-AC Milan and Lyon, now Rennes). All three are full internationals.

While a handful became senior international players with France, several switched their allegiance to other countries. They included Djamel Abdoun, a winger who went on to play for Algeria, striker Moussa Sow (Senegal), midfielder Olivier N’Siabamfunnu (DR Congo) and much travelled striker Franck Dja Djedje, once of PSG, Nice and Hibernian among others, who ended up playing for Ivory Coast at the 2008 Olympics.

Neuer was the only member of the Germany squad - they were knocked out by France at the semi-final stage in 2005 - who went on to feature prominently for his country.

However, several players did go on to play for other nations. The most famous name among them was Kevin Prince-Boateng, the former Spurs, AC Milan and Schalke forward, who opted to play for Ghana. His younger brother, the classy defender Jerome Boateng, is of course a mainstay for Germany and Bayern Munich these days.

Also in the Germany team, which was coached incidentally by legendary German player Uli Stielike, were Eugen Polanski (Hoffenheim defender, switched allegiance to Poland and played for them at Euro 2012), Ashkan Dejagah (ex Wolfsburg and Fulham midfielder, switched to Iran), Stephan Schrock (now plays for the Philippines) and Chhunly Pagenburg (switched to Cambodia, career cut short through chronic injury).

See Part Two next week to discover other famous names who took part in the 2005 tournament.