Honours even in U18 friendly international 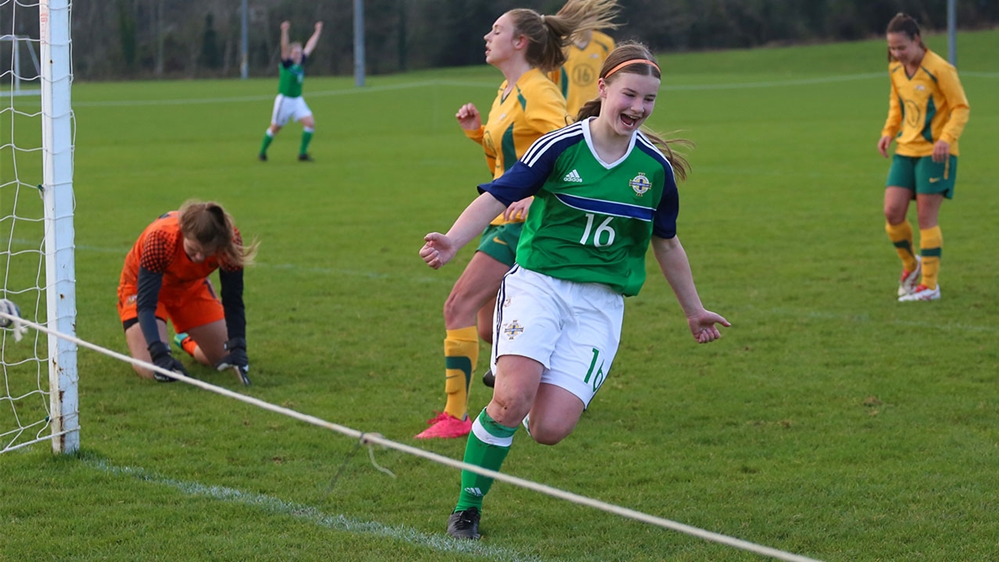 The Northern Ireland U18 schoolgirls side produced a gritty display in securing a 2-2 draw with their Australian counterparts in an international friendly.

Australia started brighter and created a few half chances early on, while Northern Ireland then carved out a couple of openings on the counter attack.

Abbie Magee was first to go close for Northern Ireland after cutting inside and unleashing a shot which drifted wide of the target.

Shortly after Australia took the lead through Joey Cartwright. Lucy Jerram held off a defender and played in Cartwright who fired a well-placed shot past Kirsty McCaughtry.

The Northern Ireland girls reacted well and started to come into the game more, controlling the tempo and pressing high on Australia.

They worked the right flank well with Chloe Orr forcing the visitors into conceding several corner kicks. The pressure on the Australians continued with Megan Bell playing a lovely through ball to Abbie Magee who forced the Australian keeper into a smart stop.

Northern Ireland’s Rebecca Bassett then took control of the ball from deep and went on a driving run to force a last ditch tackle from Erin Pridmore before she could get her shot away.

But the home side were rewarded for their pressure when Emily Wilson was played through by Bassett with a lovely weighted pass. Wilson, with only the keeper to beat, made no mistake with a low drive.

As the first half drew to a close Northern Ireland continued to have chances with Emma McMaster and Chloe Orr having attempts on goal.

Both teams made changes at half-time in a bid to push on in the second half.

Northern Ireland continued to play some nice football, working the channels well and creating goalscoring opportunities. Megan Bell played a great ball over the top for Rebecca Bassett to run on to. She was forced wide but skipped past two defenders and got her shot away, although it drifted wide.

Morganne Beggs was next to find herself on the edge of the box for Northern Ireland. She produced a well hit shot that seemed destined for the top corner only for the keeper to get fingertips to it and concede a corner kick.

Megan Bell proved dangerous with several set pieces, while Morganne Beggs was again denied by a smart save from Australia’s Kiara Rochaix.

The hosts took the lead through Emily Wilson. She grabbed her second of the game after an initial shot by Nikita O’Neil was palmed into her path – and she made no mistake from close range.

Both Teresa Burn and Louise McDaniels then had good efforts, with the latter unlucky with a shot from distance that just went narrowly wide.

As the game entered the closing stages Australia came back fighting, pressing for an equaliser, with Caitlin Pickett and Remy Siemsen both going close on separate occasions.

With Northern Ireland sitting back, Australia piled forward, and after the home side failed to clear the ball in the box Australia’s Joey Cartwright saw her low drive find its way into the empty net and bring the scores level. And 2-2 was how it finished.