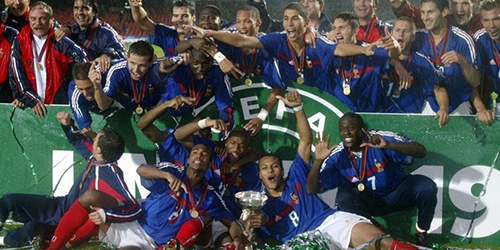 When Northern Ireland last hosted a major UEFA tournament there were numerous stars of the future on show.

And we can expect to see plenty of emerging talent when the Women’s Under-19 Championship is staged in the country this summer - if the last tournament staged here is anything to go by.

The French won their first ever UEFA European Under-19 Championship when Northern Ireland hosted the men’s version of the finals back in 2005.

Several members of that French squad went on to become full internationals, both for France and other countries. Goalkeeper Hugo Lloris and midfielders Yohan Cabaye and Yoann Gourcuff have subsequently starred for France, while winger Djamel Abdoun went on to play for Algeria and striker Moussa Sow for Senegal.

England, who were beaten 3-1 in the final by France at Windsor Park in Belfast, featured several players who have gone on to play in the Premier League, including West Ham captain Mark Noble, who has been operating in the middle of the park for the Hammers since 2004, and Middlesbrough midfielder Grant Leadbitter.

Two members of the England squad subsequently switched their allegiance to other nations, most notably West Brom midfielder James Morrison, who has won 42 caps for Scotland. Rotherham striker Dexter Blackstock (ex QPR and Forest) went on to represent Antigua and Barbuda.

Northern Ireland, who lost all three of their group games at the 2005 tournament, featured a couple of players who earned full international caps, Glenavon keeper Jonathan Tuffey and midfielder Jonny Steele, who is now playing for Miami FC in the North American Soccer League.

Serbia, beaten 3-1 by England in the semi-finals back in 2005, had a couple of players in their panel who went on to earn full international honours.

Gojko Kacar, who played for several years for Hamburg in the Bundesliga, notched up 25 international caps, while Nenad Tomovic, who operates at right back for Fiorentina in Serie A, has been capped 22 times by Serbia.

The Armenia squad also had a player who went on to feature for the senior international side. Striker Edgar Manucharyan, who was once on Ajax’s books, has 50 caps to his name.

Players of note in the Norway squad were central midfielder Per Skjelbred, who plays for Hertha Berlin in the Bundesliga these days and has been capped 42 times by Norway, Norwich and Norway midfielder Alex Tettey (34 caps) and Rosenborg defenders Tore Reginiussen and Johan Bjordal, who have earned 20 and two international caps respectively.

Several members of the Greece squad at the tournament now play in the Greek Superleague and have played, or still play, for their national team.

They include Olympiacos right back Giannis Maniatis, AEK Athens midfielder Lazaros Christodoulopoulos, and Christos Aravidis of AEK Athens, the forward who scored Greece’s goal that famous night in October 2015 when Northern Ireland defeated the Greeks 3-1 in Belfast to secure their place at Euro 2016.

Also among their number were Dimitris Sotiriou, a goalkeeper with Platanias, defensive midfielder Grigoris Makos (Panetolikos) and Georgios Tzavellas, a left back who was recently released by PAOK following disciplinary issues.

See Part One to discover other famous names who took part in the 2005 tournament.