Take a look back at a history making 2016 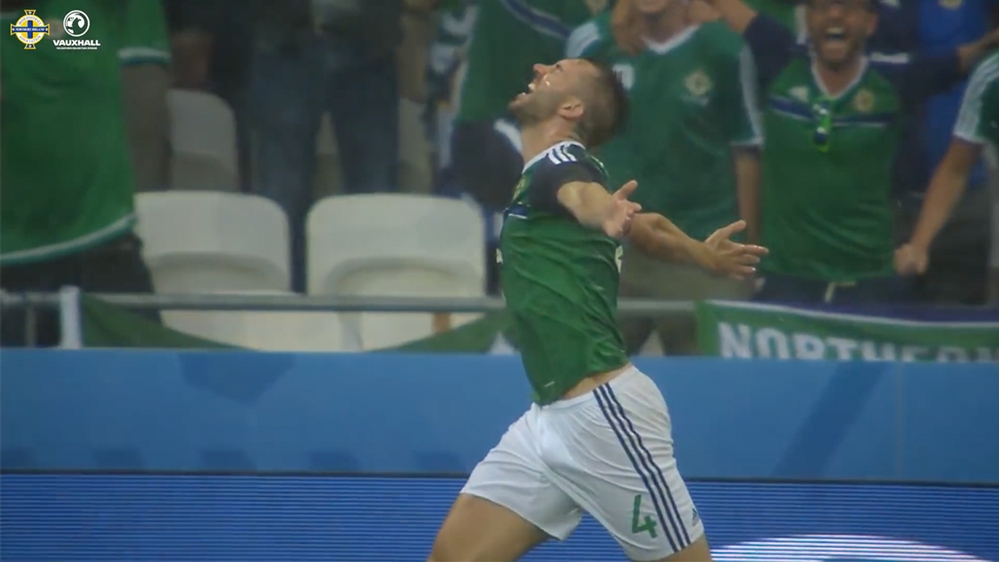 2016 was a year that will live long in the memory of every Northern Ireland fan.

From the unforgettable summer in France, to the opening of the new National Football Stadium at Windsor Park, it was 12 months that saw massive progress both on and off the pitch. As the new year comes around, we have come up with our top 10 moments of 2016. What are yours?

On the 28th May Michael O’Neill named his 23 man squad for EURO 2016. The images of the players that were selected for the tournament were projected onto the rocks at the Giant’s Causeway. The manager picked Will Grigg over Liam Boyce with Grigg going on to be one of the most recognisable names at the tournament, despite getting no game time. More than 300 Northern Ireland fans were at the announcement which was staged in the iconic surroundings of Titanic Belfast.

Ahead of UEFA Euro 2016, Hughes became the first Northern Irish outfield player to earn 100 caps when he came on as a 30th-minute substitute for the injured Craig Cathcart in a goalless friendly away to Slovakia on 4 June. Twelve days later he made his tournament debut at the age of 36, marking Yevhen Konoplyanka in a 2–0 win over Ukraine in Lyon.

It was the game we waited 30 years for. Northern Ireland back in a major tournament for the first time since 1986. There was huge emotion as the players ran out at the Allianz Riviera. Despite losing the match 1-0 it was a game to proud of the players and to be proud of being from Northern Ireland.

We all knew that Northern Ireland has the best fans in world football and in the summer they were given a medal to prove it. After incredible support and setting the tournament alight, the GAWA were presented with the Medal of the City of Paris by Madame Anne Hidalgo as a mark of gratitude for their exemplary behaviour in the city during Euro 2016.

Facing the world champions in Paris, Northern Ireland goalkeeper, Michael McGovern, put in a superb performance against the world champions to limit them to one deflected goal and to ensure qualification for the last 16 of the tournament. No matter what they threw at him, the Enniskillen man was able to block, parry or push away. It was a remarkable performance and one that was hailed by commentators and pundits around the world.

Following the heroics of EURO 2016 the Northern Ireland players returned to Belfast to a heroes’ welcome. More than 10,000 supporters packed into the Belsonic venue in Belfast to cheer the team. The players were also able to thank the tens of thousands of supporters that had made the trip to France.

4.Michael O’Neill signs on for another four years

In March the Irish FA confirmed that Michael O’Neill had signed a new four-year contract The deal will see him continue as Northern Ireland manager until June 2020.

O’Neill is the most successful Northern Ireland manager in a generation having led the international team to qualification for EURO 2016. Next, he might just lead his country to the world cup in Russia!

3.Opening of the Stadium

It was the goal that guaranteed that Northern Ireland would record their first win in a major tournament since 1982. Niall McGinn’s strike six minutes into added time sent the GAWA absolutely crazy as the man from Donaghmore followed up Stuart Dallas’ well hit strike to get the second in the 2-0 win over Ukraine. It was a cool finish from the Aberdeen winger and one that will go down in Northern Ireland history!

There was only one moment that could be number one. In the 49th minute Gareth McAuley rose to meet Oliver Norwood’s deep, long free-kick. The ball slashed into the top corner of the net and the West Brom defender ran with his arms outstretched before throwing himself on to the ground in front of the GAWA. Northern Ireland went on to win the game two nil – and to reach the last 16 of EURO 2016. Unquestionably, the moment of the year!