Currie says Larne made life tough for Premiership side 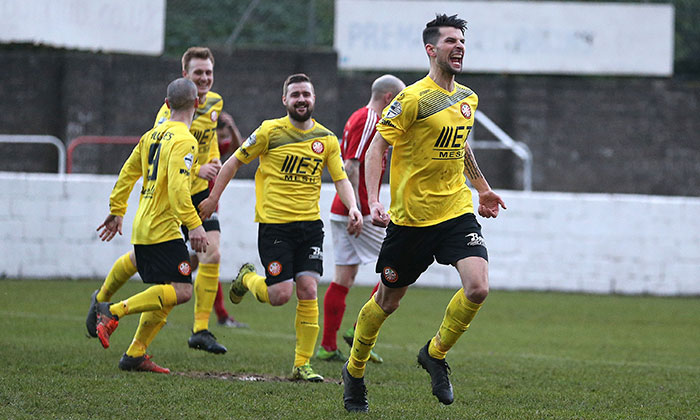 Portadown boss Niall Currie admitted his team were made to battle to secure a place in the Tennent’s Irish Cup sixth round.

The Premiership side just edged a tight contest against Championship opponents Larne at Inver Park.

“It was a tough game, a physical game. There was lot of the ball in the air. Larne acquitted themselves well but we were well up for the battle today and we matched them,” said Currie.

Portadown went into the break 2-1 up and that’s how it finished.

“We had to manage the game in the second half. It was a tough day,” said Currie, who took charge of his hometown club at the start of last month and now faces a trip to former charges Loughgall in round six.

The Ports boss further revealed he was delighted with the contributions of debutants Adam Foley and Tiernan Mulvenna. The two former Glenavon players, who signed for the Ports during the week, were lively throughout the game.

Currie said: “They were excellent. Both players had superb debuts. They gave us something different.”

Foley opened the scoring for Portadown on 32 minutes when he flicked the ball home neatly after getting on the end of Aaron Haire’s low cross.

Stephen Hughes put the Ports two up in the 42nd minute before James McCabe pulled a goal back for the home side with a neat strike from just inside the area.

Foley, who admitted his team had to “dig in and fight for it” against Larne, was delighted to score on his debut for Portadown.

He said: “I am buzzing after getting on the scoresheet. I’ve been waiting for that moment for a long time. I’ve been injured for nearly two years so getting that goal was great. I couldn’t have asked for a better start.”

Larne manager Davy McAlinden was full of praise for his team. He felt the Championship side deserved more from the game. He was especially pleased at how his players responded when McCabe was dismissed for a second bookable offence on 77 minutes.

He said: “We are really frustrated. We feel it was one that got away. I don’t think we deserved to go 2-0 down but we responded brilliantly and I thought we should have had a penalty which could have made it 2-2.”

The Larne boss felt it was an even game. He admitted his side missed a golden opportunity to equalise on 65 minutes when striker Paul Maguire headed wide after losing his marker to get on the end of a pinpoint delivery from Ryan Kane.

“We definitely knocked on the door. We can take a lot of positives from the game,” he added.