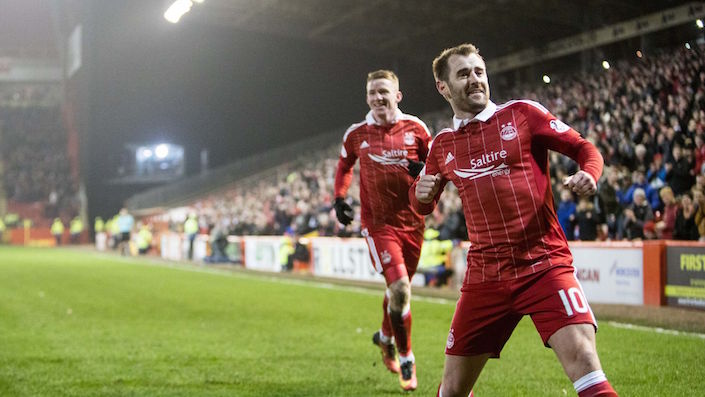 Northern Ireland winger Niall McGinn continued his excellent form in 2017 when he hit a brace of goals in Aberdeen’s 3-0 win over Dundee on Friday evening to take his tally to four in his last two outings for the Scottish Premiership outfit.

McGinn, who is now Aberdeen’s second top scorer this term with 12, hit a stunning volley for his first goal which had Aberdeen boss Derek McInnes singing the 29-year-old’s praises.

“His goal was different class. His first touch to set it up and then to flick it out of the air so quickly was a fantastic piece of skill,” enthused McInnes.

“Niall has scored brilliant goals for us over the years but that one was right up there with the best of them. He produced that real moment of quality.

“In terms of the game it took us a while to get going and get into our stride but once we got in front I never felt we would do anything other than win the game.”

In the Championship in England, Conor Washington scored his fourth goal of the season for Queen’s Park Rangers on Saturday. However, it was merely a consolation as visitors Burton Albion ran out 2-1 winners at Loftus Road.

Defender Rory McArdle, who won his only Northern Ireland cap against Turkey seven years ago, was the hero for League One Bradford City when he bundled home the winner in a 2-1 success at Oldham, his first goal for the club since last February.

In the National League Larne-born Paddy McLaughlin scored from the penalty spot in Gateshead’s 3-1 loss at Torquay United, while in National League North former Northern Ireland international James Lawrie, who hails from Dundonald, scored as Altrincham went down 4-1 at top of the table AFC Fylde.

Meanwhile, in the fourth round of the FA Cup there was little joy for Northern Ireland players over the weekend.

Northern Ireland skipper Steven Davis was rested and had to be content to watch from the bench as Southampton went out of the competition to a clinical Arsenal side who won 5-0 at St Mary’s Stadium.

There was disappointment too for his Northern Ireland team-mate Ollie Norwood as Championship leaders Brighton & Hove Albion suffered a shock 3-1 defeat at National League side Lincoln City.

Another non-league side, Sutton United, also provided an upset when they overcame a Leeds United outfit which included Stuart Dallas - Sutton won 1-0 at home - and Will Grigg’s Wigan Athletic were no match for Manchester United who progressed to the fifth round following a comfortable 4-0 victory at Old Trafford.

One player who will be looking forward to this evening’s fifth round draw though is Millwall’s Shane Ferguson who supplied a sublime cross for Steve Morison’s goal which knocked Premier League Watford out of the competition yesterday.