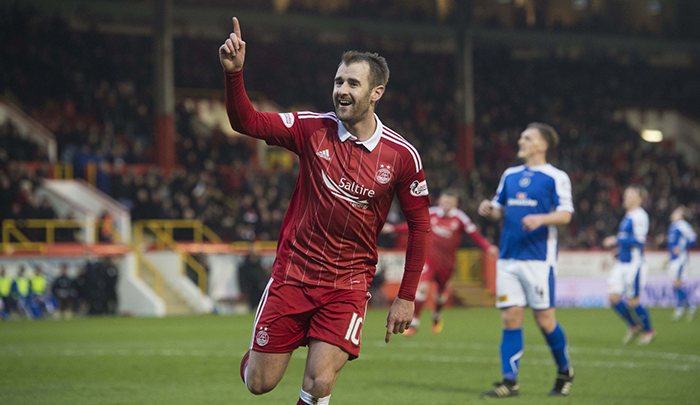 Northern Ireland winger Niall McGinn returned from his mid-winter break in style when he hit a brace in Aberdeen’s comfortable 4-0 Scottish Cup win over Stranraer at the weekend.

The former Derry City player, who won his 50th cap for his country against Croatia in November, found the net either side of half-time to take his tally for the season to 10.

The 29-year-old, who also weighed in with an assist for Aberdeen’s opening goal, earned high praise from Dons manager Derek McInnes after the victory.

“I thought Niall was outstanding,” declared a happy McInnes.

“He has been back training with us this week. We are pleased that he is recharged and energised for the second half of the season. If that is a taste of what is to come for the rest of the campaign then I am delighted,” he added.

McGinn’s contract is up at the end of the season but McInnes is not overly concerned about the player’s future.

“Niall is very happy here. He has never indicated that he wants to leave. He is greatly appreciated by everyone in the city and the club and by his team-mates,” said the Aberdeen boss.

Elsewhere in the fourth round of the Scottish Cup Aberdeen’s next opponents, Ross County, had an emphatic 6-2 victory over Championship side Dundee United with Northern Ireland striker Liam Boyce claiming an assist as well as his 14th goal of the campaign.

Defender Aaron Hughes made his debut for Hearts who had to settle for a 1-1 draw in their tie at Raith Rovers yesterday, while Callum Morris also made his first appearance for his new club Dunfermline, who won 3-2 at Alloa Athletic.

In the Premiership in England, Chris Brunt hit a sensational strike in West Brom’s 2-0 home win over bottom of the table Sunderland. It was his second goal in three games for the Baggies.

“I wasn’t expecting the ball to come back off the bar, but once it did I just concentrated on keeping the shot down and I hit it really well and was delighted to see it go in,” said Brunt, who now has three goals and three assists in West Brom’s last five home games.

“It was important for us to bounce back after the 4-0 defeat at Spurs. Three points, two goals and a clean sheet is a good response from the team.”

In the Championship, Jamie Ward went straight into Nottingham Forest’s starting 11 on returning to the club after his loan spell at Burton was cut short. He played the full 90 minutes as Forest defeated Bristol City 1-0 at The City Ground to move further away from the bottom three.

In League Two, Northern Ireland under-21 international Shay McCartan scored his first goal of the season, a 25-yard free kick, to earn 10-man Accrington Stanley a point at home to Carlisle United.

Accrington boss John Coleman said: “It was a fantastic goal by Shay. We know he can do that in training and if they had had two keepers on the line they wouldn’t have saved it.”

Stevenage’s new loan signing from Luton, Josh McQuoid, made his debut for the Hertfordshire side on Saturday in their 2-0 defeat to Hartlepool United in League Two.

Meanwhile, in the National League, former under-21 international Rory McKeown was on the scoresheet for Southport in their 4-2 home defeat by North Ferriby United.

The 23-year-old, who had brief spells with Accrington and Warrington Town this term after leaving Raith Rovers last summer, has just signed for the Lancashire side until the end of the season.

Finally, former Glentoran favourite Jordan Stewart came on as a late substitute to make his first appearance in nearly three months for Swindon Town who lost 1-0 at home to Peterborough United in League One.