One of the most eagerly anticipated dates in the domestic football calendar is Tennent's Irish Cup fifth round day.

It comes at a pivotal point in the season for many clubs. Whether it has been a disappointing campaign thus far or exceeded expectations, the Irish Cup provides the opportunity to regain some impetus or to push on in search of some coveted silverware come the business end of the season.

Throw into the mix some heavyweight clashes and a sprinkling of cup magic for the romantics among us and it's easy to see why so many look forward to this coming weekend.

And this year is no exception.

For the ‘tie of the round’ it is hard to look past the clash of the traditional 'Big Two' as Glentoran welcome Linfield to the Oval.

It will be their third meeting of the season and comes hot on the heels of a Boxing Day draw between the sides that saw Mark Haughey fire the Blues in front early on before Aaron Harmon levelled on the hour for Gary Haveron's side.

Glentoran limbered up for this Saturday's clash with an impressive five-goal thumping of Portadown at Shamrock Park on Tuesday, while Linfield stuttered to a defeat at home to Coleraine.

That win will have hugely boosted the Bannsiders' confidence ahead of their Irish Cup tie at home to League Cup finalists Carrick Rangers.

Oran Kearney's side have been inconsistent of late but they will go into the game with the edge over Rangers having defeated them at the Showgrounds on New Years' Eve. However, will Aaron Callaghan's men have the whiff of revenge in their nostrils?

And will Colin Nixon's Ards have similar designs of retaliation in their minds when they face Crusaders for the second time in four days?

On Tuesday night in Bangor it initially looked rosy for Ards after goals from Craig McMillen and Carl McComb helped them race into an early lead but the Crues aren't league champions for nothing and underlined their credentials to storm back to claim the points with a 4-2 win.

The fourth all-Premiership tie pits fourth placed Ballymena United and Cliftonville, in third, together at the Showgrounds.

David Jeffrey's Sky Blues are already in the League Cup final and defeated the Reds at home earlier this season but Gerard Lyttle's side have only lost once inside 90 minutes since the end of October.

Holders Glenavon kick off their defence of the trophy at home to Northern Ireland Intermediate League opponents Portstewart.

The Lurgan Blues go into the game on the back of a 4-3 away win over Ballymena on Tuesday night which was inspired by a Greg Moorhouse hat-trick.

But, as boss Gary Hamilton explained at the time of the draw, they won't be underestimating their visitors.

He said: "We've had Annagh beat us during the last couple of years, we've had a difficult game from Loughgall at home last year, so you need to have the right attitude or these teams can spring a surprise.

"If we turn up and perform and our attitudes are right then it’s a decent draw for us."

Two sides, Trojans and Fivemiletown United, are appearing at this stage of the competition for the first time in their history.

Trojans, who like Portstewart operate in the NI Intermediate League, face Armagh City at Holm Park and prepared for the game with a midweek friendly against Institute, losing only to two goals inside in a minute in what was an encouraging performance.

And Fivemiletown United are also in action against Championship opposition in the shape of Loughgall at Lakeview Park. Currently unbeaten in Mid-Ulster Intermediate A, Scott Robinson's side have shown form against NIFL opposition with victories over Newington and Dundela earlier in the competition.

Elsewhere, both Larne and Warrenpoint Town will fancy their chances against Premiership strugglers Portadown and Ballinamallard United respectively while Premier Intermediate League high flyers Tobermore United will be hoping to topple Championship basement boys Annagh United, although a new coaching structure at the club does seem to have steadied the ship on the Tandragee Road in recent weeks.

All fifth round games will be played to a finish - with 15 minutes each way extra time and penalties if required. 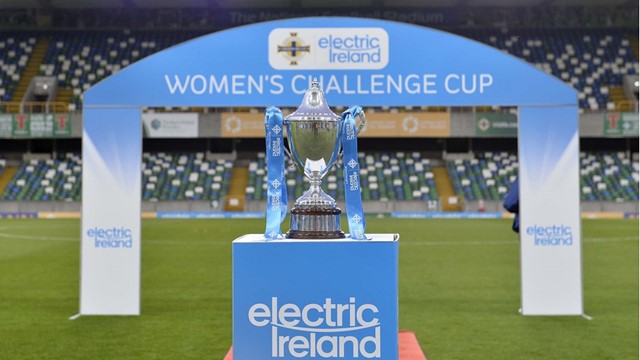