Crusaders through to sixth round with 2-0 win over Ards 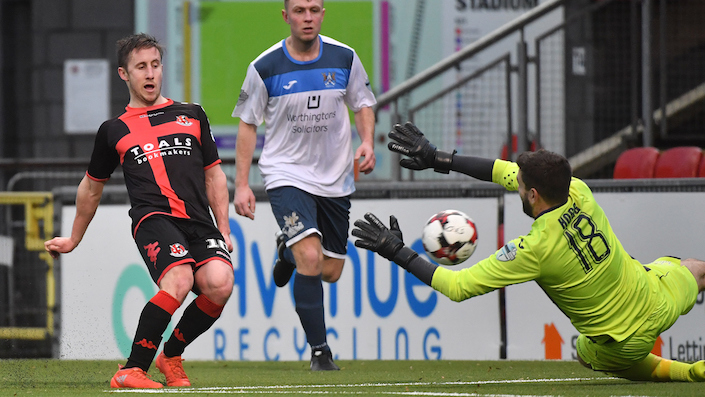 Michael Carvill scored Crusaders’ second in their 2-0 victory over Ards in the fifth round of the Tennent’s Irish Cup at Seaview today.

Carvill was expecting a tough match as his side played Ards for the second time this week having come from behind to win 4-2 on Tuesday night at Clandeboye Park.

He said, “It’s very very difficult to play the same team back-to-back inside a week. Obviously after the match on Tuesday night we were expecting a tough one today and that’s exactly what we got, so we’re very happy to get the win.

“2-0 is always dangerous and if they scored we would have been under a bit of pressure, but we held on, saw it through and I think we were comfortable enough.”

Crusaders took the lead on 19 minutes as Ards defender Emmet Friars turned the ball into his own net from a dangerous Craig McClean cross. This was Friars’ second own goal of the week against the home side as he gave Crusaders a 3-2 lead on Tuesday night.

Crusaders went 2-0 up on 35 minutes as a Carvill outmuscled the Ards defence and finished neatly past Aaron Hogg in goal. An opportunistic effort from the forward which made his side comfortable going in to half-time

He said, “The defender went to clear the ball and I thought I had a chance to nick it and go one-on one with the keeper and finished it with a wee dink. I was just delighted to see it hit the back of the net to be honest.

“Most importantly we’re though to the next round and will be ready when it comes around.”

Carvill expects a tough match in their sixth round tie with PSNI who came from behind at home to beat Distillery 2-1.

He said, “From experience over the years, playing against anyone in the Irish Cup is a one-off game, so it will be tough.”