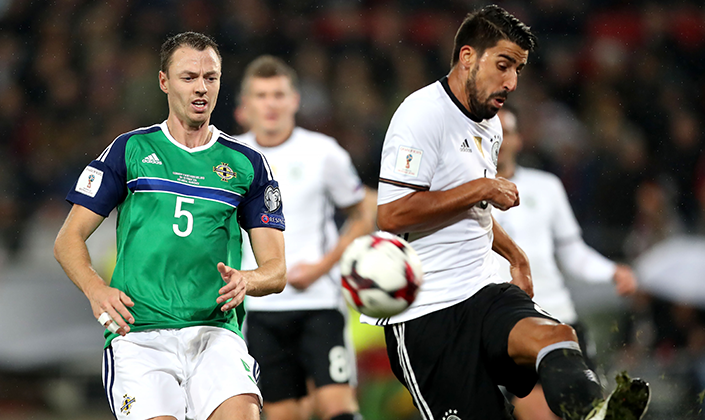 If football matches were played on paper then Germany would defeat Northern Ireland this evening.

But famous names, and the famous clubs they play for, do not always guarantee results. And even world champions Germany know that.

The Germans’ squad list reads like a ‘Who’s Who?’ of world class footballing talent playing at the likes of Real Madrid, Barcelona, Bayern Munich, Paris Saint-Germain, some of the biggest club sides on the planet.

Northern Ireland’s panel, by contrast, is a mix of experienced and talented Premier League performers, a raft of gritty and determined players from the Championship, League One and the Scottish Premiership plus a seasoned keeper operating in the Irish League who has just celebrated his 40th birthday.

On paper it should be no contest in the FIFA World Cup Russia 2018 Qualifying Group C clash at the National Football Stadium at Windsor Park (7.45 kick-off). And recent results against the Germans – a 1-0 defeat at Euro 2016 and a 2-0 defeat in Hannover last autumn – also point in the world champions’ favour.

However, let’s not forget this Group C matchday nine encounter is a battle between the top two sides in the group. It should be a fascinating contest.

The Germans will be looking to maintain a 100% record to date – eight wins out of eight – but Northern Ireland will want to preserve the best defensive record in European qualifying. They have only conceded two goals (against the Germans last year), and it’s a record that is shared with Germany.

Michael O’Neill insists there is no pressure on his players when they take on the Germans, who with their young guns lifted the Confederations Cup back in the summer to sit alongside the World Cup in their trophy cabinet.

Northern Ireland have already done remarkably well to secure second place in the group – and certainly the footballing world does not really expect them to get any sort of result against the world champions.

With the likes Aaron Hughes, Jamie Ward, Paddy McNair and Liam Boyce out of action, the task has been made a little more difficult.

But Davis, Evans, McAuley, Brunt and co love the underdogs tag so often bestowed upon them and there’s no reason why they will not rise to the occasion once again.

The players believe they played better against Germany in Hannover than they did at Euro 2016.

And with a vociferous Green and White Army roaring them on, captain Steven Davis insists they are going to “give it a real go” this evening to extricate some points from the Germans. Here’s hoping they do…