Get your weekly update from Boys Across the Water 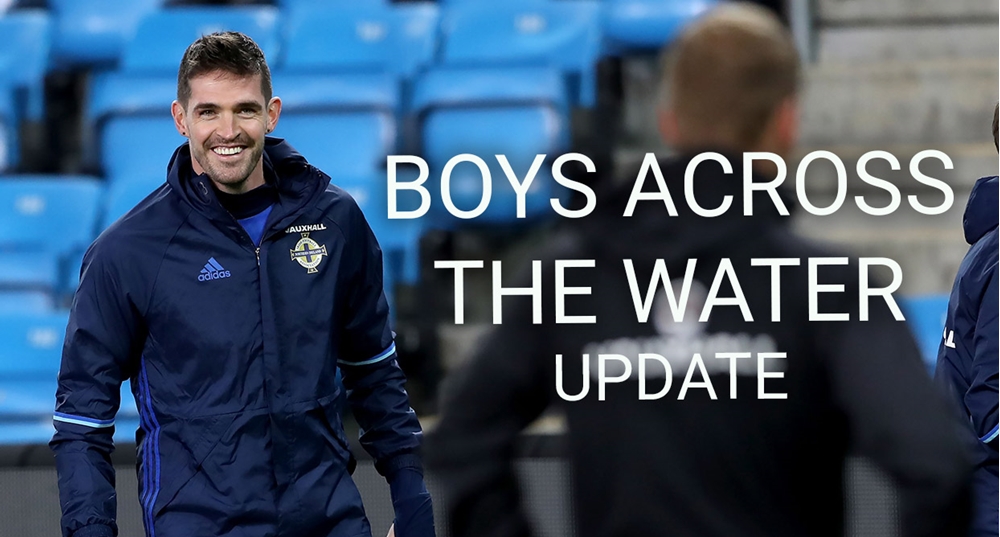 Striker Kyle Lafferty bagged his eighth goal of the season to give Hearts a narrow 1-0 success over Tommy Wright’s St Johnstone at Murrayfield at the weekend.

With international manager Michael O’Neill sitting in the stands, 30-year-old Lafferty’s deflected shot in the 74th minute ensured all three points were going to the Edinburgh side.

After the game Hearts boss Craig Levein praised the Fermanagh-born forward’s contribution to a victory that now sees them move into fifth spot in the Scottish Premiership.

“Kyle Lafferty gives everything every week and he’s still getting up to speed,” declared Levein. “I think he deserved his goal for his endeavour.

“He got a goal today, but I was even happier with his attitude.”

Elsewhere, Accrington Stanley striker Billy Kee took his tally to 10 for the season when he converted a third minute spot-kick in the League Two outfit’s 2-0 away win at Crewe Alexandra.

In the National League Jamie Reid chalked up his first goal of the campaign for Torquay United who left FC Halifax Town with a point following a 1-1 draw.

The former Northern Ireland under-21 striker had been on loan at Torquay from League Two Exeter City but has now signed a permanent deal with the South Devon side until the end of the season.

With the crucial play-off with Switzerland looming there was concern among the Northern Ireland faithful when Jonny Evans left the field after 32 minutes of West Brom’s 1-0 defeat at Steven Davis’ Southampton on Saturday evening.

The 29-year-old defender sustained a groin injury at the St Mary’s Stadium, but Evans admits he will not know the extent of the injury until a scan is completed.

Evans said: “I felt my groin after a challenge with Shane Long and I couldn’t shake it off so I had to go off.

“I’ll assess it and probably get a scan on it to see where the injury’s at.”

The Baggies' 1-0 defeat to the Saints means they have now gone eight games without a win in all competitions, however Evans insists the players are "not concerned".

“I don’t think the lads are concerned at all,” added the cultured centre back. “We’re experienced enough to know it’s a long season.”

On a more positive note his brother Corry Evans returned to action for Blackburn Rovers on Saturday after shaking off an ankle injury which he had picked up on international duty.

‘Well striker Louis Moult scored twice in the second half to steer the club to its first League Cup final in 12 years and their first national cup final since 2011.

Celtic are currently unbeaten in 60 domestic games but Robinson has backed his side to cause a huge upset when the two clubs meet for the 26 November decider.

“It would be nice to beat them, wouldn’t it?” said the Motherwell boss. “Somebody has got to beat them. Why not us?”