Junior International team grab a point against hosts in opener 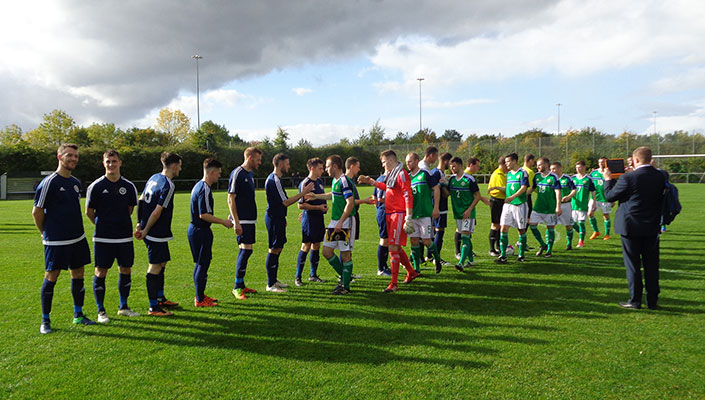 The Northern Ireland Junior International team drew with hosts Scotland in their first game in the Umbro Quadrangular Tournament 2017.

Harry McConkey’s side came from behind in Glasgow to draw 2-2 thanks to a couple of great goals from Dergview striker Ryan Campbell.

Northern Ireland prepared well for the tournament with games against Ballinamallard United and Cliftonville.

However, they started slowly against the Scots and found themselves a goal down after five minutes.

During the remainder of the half Northern Ireland were in the ascendancy and created a couple of good opportunities. Warner Mullen had a decent effort blocked while Ryan Campbell shot just wide of the post.

McConkey's side started the second half brightly and were unlucky not be awarded a penalty when Stephen Curry appeared to be clipped inside the box.

Then Scotland doubled their lead, pouncing on a defensive mistake to score.

After that Northern Ireland began to boss the play - a couple of substitutions helped to freshen things up - and were duly rewarded when Campbell pulled a goal back with a neat finish.

On 83 minutes Campbell produced a rocket of a shot to earn the Regions team a deserved draw.

Manager Harry McConkey said afterwards: “The boys never gave up and their desire and hunger were rewarded appropriately with a hard fought point.”

Northern Ireland will also be facing Isle of Man and Republic of Ireland in the Umbro tournament.