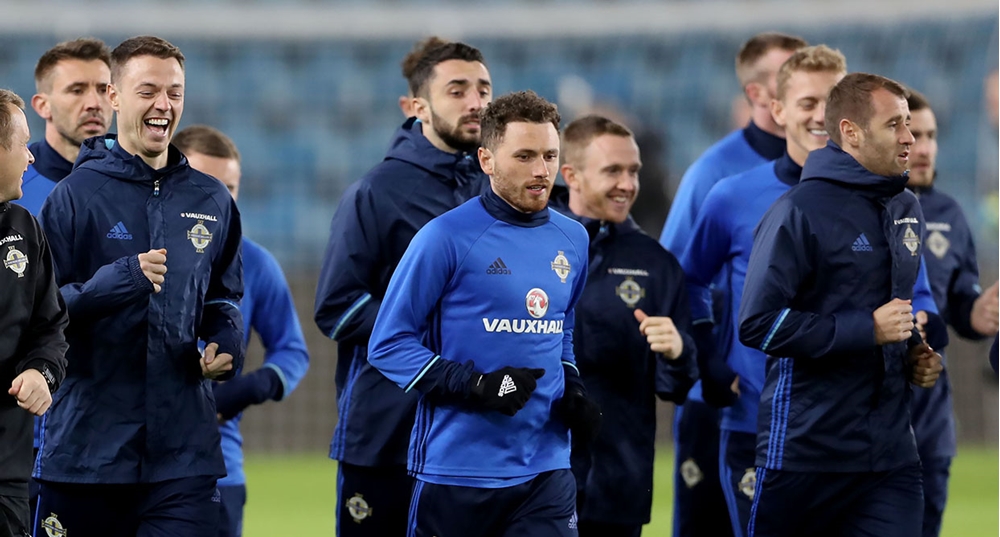 Northern Ireland go in to their clash with Norway tonight knowing that a point will definitely secure them a World Cup play-off spot.

Greece’s 2-1 win away to Cyprus last night brought them to 13 points in the play-off rankings but they cannot improve their points tally in the final round of games as they play Group H bottom side Gibraltar.

And that means a point tonight for Northern Ireland, who are also currently on 13 points, will be enough to ensure they will be one of the eight European runners-up going into two-legged play-offs for four places at next year's finals in Russia.

Michael O’Neill has promised, however, that his side will be looking for a win rather than trying to grab a draw at the Ullevaal Stadium in Oslo (19.45 kick-off GMT).

The Northern Ireland squad has a clean bill of health following the gruelling encounter against world champions Germany.

Conor Washington and Stuart Dallas, who both looked lively when they came on at half-time in the 3-1 defeat to the Germans, look set to start ahead of Lee Hodson and Kyle Lafferty, who began the game in Belfast. Washington and Dallas look likely to be the only changes to the side overpowered by the number one ranked team in the world on Thursday night.

Josh Magennis, who scored against Germany, limped out of training in Oslo last night following an accidental clash with defender Callum Morris but the team physios were quickly on the case and he is expected to be available for selection for the FIFA World Cup Russia 2018 Qualifying Group C encounter.

More than 2000 Northern Ireland fans have made the trip to Norway. The Ullevaal Stadium has a capacity of just over 27,000 but the Norwegian FA reckon only around 11,000 spectators will be there tonight – and they expect the Green and White Army to dominate the noise battle!

Norway will be without Joshua King, the Bournemouth striker, who picked up a hamstring injury in their 8-0 win away to San Marino on Thursday night.

However, they still have players who can hurt Northern Ireland. Basel’s Mohammed Elyounoussi, who scored a hat-trick against San Marino, is a lively forward, while Fulham midfielder Stefan Johansen and Hull City midfielder Markus Henriksen can both pose problems if they are at the top of their game.

And 19-year-old Sander Berge, who also operates in the middle of the park, is being tipped by Norwegian media to be a real star in the future.

Northern Ireland could actually be in the play-offs before they take to the pitch in Oslo. If Scotland, currently on 11 points in the rankings list of second-placed teams, fail to beat Slovenia away in Group F (17.00 start GMT) they would not surpass Northern Ireland’s tally.

However, even if that scenario unfolds, Michael O’Neill has insisted Northern Ireland will be pushing for a victory as that would help their chances of being seeded in the play-off draw come 17 October in Zurich.

The play-off games will be staged between 9 and 14 November.