Four players on scoresheet ahead of Switzerland 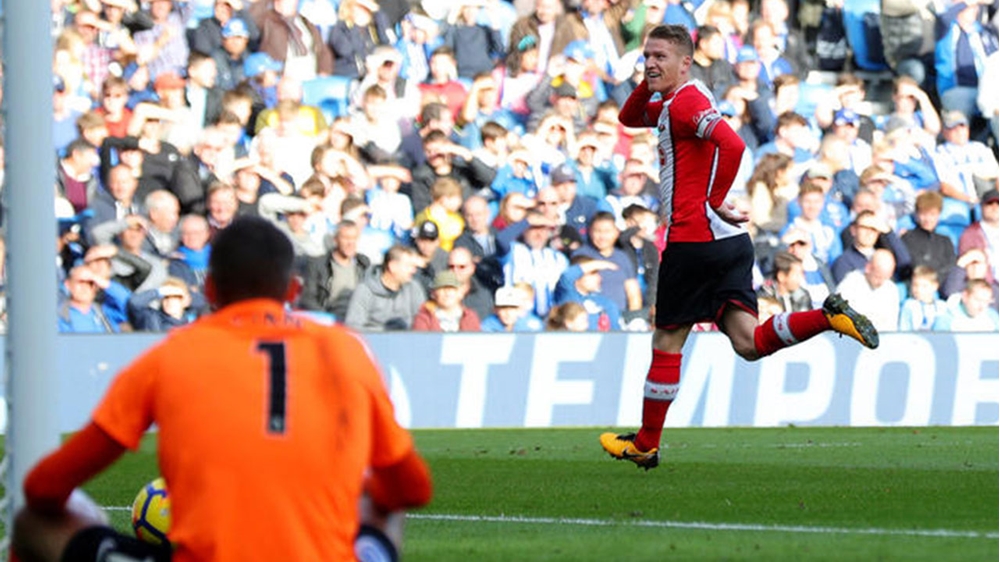 Northern Ireland skipper Steven Davis chalked up his second goal of the season as Southampton left the Amex Stadium with a point following a 1-1 draw with south-coast rivals Brighton & Hove Albion yesterday.

The 32-year-old headed home the after James Ward-Prowse’s free-kick came back off the upright in the seventh minute, however, newly promoted Albion were a much-improved outfit in the second half and deservedly equalised through Glenn Murray’s pin-point header just after the break.

Davis, who is set to win his 100th cap in next week’s crucial World Cup play-off match with Switzerland, admitted that the Saints’ should have capitalised on their excellent start.

Davis said: “We got the goal, the perfect start, but we never really got going from there and we’re disappointed with that.

“It was an ideal start in many ways. We know the quality James has got, he was obviously very unlucky not to score himself and his deliveries as a whole today were excellent, as we always know they will be.

“But from there on we’ve got to be a little disappointed with ourselves,” declared the Southampton skipper, “We felt comfortable enough but we didn’t have as much possession as we’d have liked and we haven’t really forced their keeper into any saves and that’s disappointing from our point of view.

“As much as we’re disappointed we’ll take the positives, go again and try to make sure we get three points on Saturday.”

Meanwhile, Kyle Lafferty gave Hearts the lead midway through the first-half of their Scottish Premiership contest against his old club Rangers with a sensational free-kick at Murrayfield.

It was the 30-year-old’s ninth goal of the season however the visitors eventually ran out 3-1 winners thanks to a brace from veteran striker Kenny Miller.

“I’m happy at a lot of the things we did in the first half, and for the first hour in general,” said Hearts boss Craig Levein, “The tail end of the game wasn’t good at all. I thought Kyle’s free kick was excellent though, and we should have another goal or two to go along with it.”

Lafferty’s international striking partner Conor Washington was also on target over the weekend as Queens Park Rangers sprung a surprise with a 2-1 victory over second-placed Wolves at Loftus Road.

The 25-year-old, who gave the Hoops the lead with his fourth goal of the campaign, now face another tough fixture when they entertain leaders Sheffield United tomorrow night.

‘We seem to do better against the better teams,” declared Washington, “They are probably going to have the ball a little more than us and move the ball quicker and try to break through the lines.

"I watched the Sheffield United game on Friday night. They are a good side and we’re looking forward to testing ourselves again.”

Other Northern Ireland players on the scoresheet over the weekend were winger Jordan Jones who earned Kilmarnock an impressive point at unbeaten Celtic and Billy Kee who notched his 11th of the season in Accrington Stanley’s 4-1 home win over Barnet in League Tow.

Finally, there was more good news for international boss Michael O’Neill as Paddy McNair played his first match for Sunderland in 11 months after coming on as a substitute in their 3-2 home defeat to Bristol City.

“It’s been a long 11 months,” admitted McNair, “It’s great to be back though and be feeling like a footballer again.”