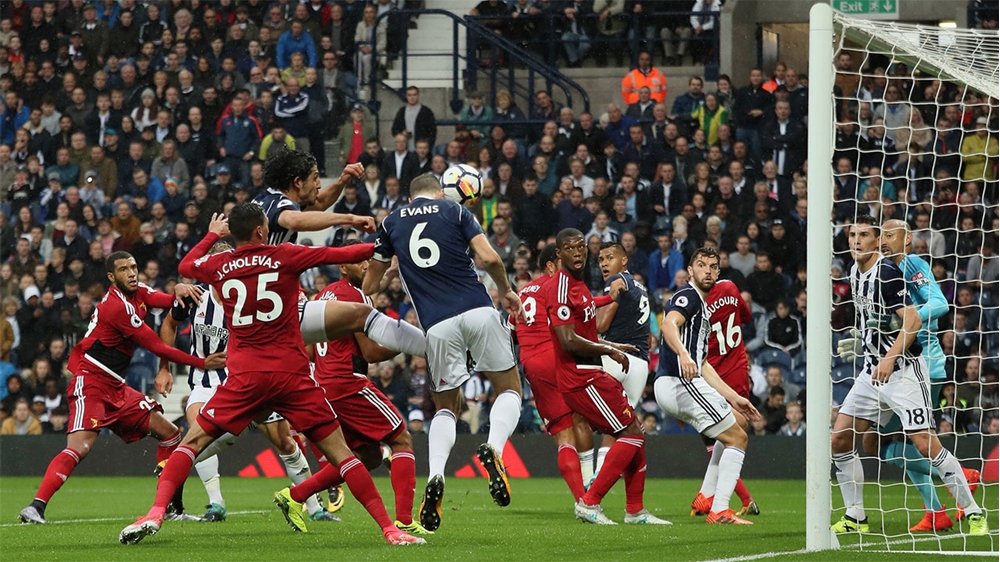 Defender Jonny Evans chalked up his first goal of the season as West Brom were held to a 2-2 draw at home to Watford in the Premier League on Saturday.

However, the former Manchester United defender was unhappy that the Baggies had dropped two points after his 21st-minute header had given his side a two-goal advantage.

Speaking to the Birmingham Mail Evans said: “It’s hard to tell when the games going on, but I think it is human nature, you go 2-0 up and your mind-set is to hold onto the lead for a while, maybe see out the half, and have that two-goal cushion and re-evaluate things.

“It’s not always ideal but sometimes it can happen.”

The visitors pulled a goal back just before the break before finding an equaliser in the fifth minute of injury time.

“It’s gutting to concede a goal right at the end like that,” added the 29-year-old, “especially the way we pride ourselves on our defensive resilience.

“We left ourselves open to the counter-attack, in terms of our team shape, it was a bit chaotic in the box with the last free kick.”

Meanwhile, two of the four strikers named in Michael O’Neill’s squad for the upcoming games against Germany and Norway were on target at the weekend.

Hearts forward Kyle Lafferty managed to take his tally for the season to seven goals though it was merely a consolation goal for the Edinburgh outfit who went down 2-1 at Dundee, their first defeat under new boss Craig Levein.

Northern Ireland’s most capped defender Aaron Hughes also started the game for Hearts but was substituted after just seven minutes with a recurring calf injury.

“We knew that he might struggle with his calf injury,” said boss Craig Levein. “We decided to give him a chance but obviously it didn’t last and forced us into the change.”

On Friday evening Conor Washington hit an injury time consolation goal for Queens Park Rangers who were beaten 2-1 at home in the West-London derby by Fulham at Loftus Road.

Elsewhere Will Grigg, who has had a frustrating time with injury during 2017, bagged both goals in Wigan Athletic’s 2-0 victory over Walsall at the DW Stadium.

That is now three goals in his last five games and his manager Paul Cook never had any doubt that 26-year-old would get back to his best.

“A player of Will Grigg’s quality will always score goals,” declared Cook, “As a manager you know the more minutes he gets on the pitch, the more effect he’ll have on the game.

“Some people will see him going through a difficult spell but, as a manager, you know he’ll come through that - and he has.

“It was great to see him get two goals, and he might even have had a hat-trick.”

Finally, another player who has struggled with injury this season is midfielder  Ben Reeves who made his first appearance for Charlton Athletic in over a month in the 3-1 victory at Fleetwood Town in League One.