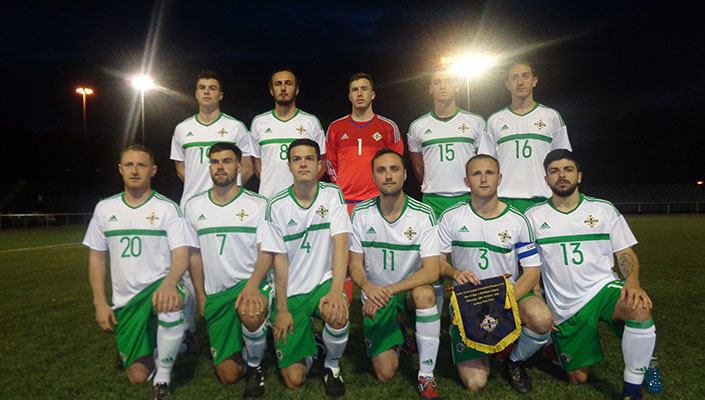 The Northern Ireland Junior International team turned on the style in their second game at the Umbro Quadrangular Tournament in Glasgow.

After weathering an early Isle of Man storm, Harry McConkey’s side moved up through the gears and ran out comfortable 4-0 winners at New Tinto Park.

In the opening five minutes Isle of Man had two great chances to take the lead but Jordan Williamson produced fine stops.

And Northern Ireland, showing seven changes from the team which drew 2-2 with Scotland earlier in the week, took the lead in the 7th minute when Ricky Thompson headed home from a corner kick.

Strong running from Thompson, Adam Gray and Dylan Wilson put IOM on the back foot and it was no great surprise when the Junior International team doubled their lead on 18 minutes. Thompson’s pinpoint cross from the right reached the feet of Gray and he produced a neat finish.

Northern Ireland continued to control the game and the third goal came in the 51st minute when Dylan Wilson’s powerful cross-cum-shot evaded the IOM keeper and nestled in the bottom corner.

The fourth goal of the match was scored just two minutes later when Mark Kelly weaved his way into the IOM box before unleashing a sweet strike which gave the keeper no chance.

After that Northern Ireland continued to control the game with some neat passing and fine interceptions by Jordan Gibson and Craig Harris.

The last kick of the game was a penalty for the Isle of Man which was saved by Paul Wells, who had earlier replaced Jordan Williamson in nets. He dived superbly down to his right to stop the spot-kick and then got up quickly to keep out the rebound. It was an excellent double save.

Manager Harry McConkey said afterwards: “The seven changes gave a new energy and impetus. The creativity of Jordan Gibson complemented by the protection provided by Craig Harris gave us a fine platform to build attacks from.

“It was a great performance from the team. The hard work of the backroom staff and players was rewarded, and that pleased me most. It will only cement our confidence in what we are doing as we prepare for our final game against the Republic of Ireland on Saturday.”