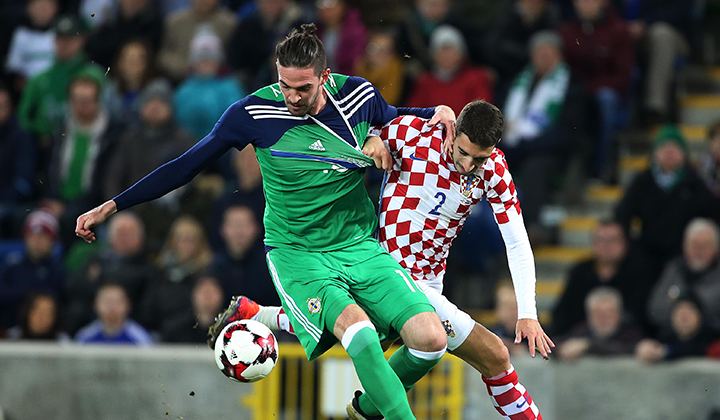 With the draw for the World Cup Qualifying Play-offs taking place on Tuesday in Zurich (1pm GMT), we take a look at the possible opponents for Northern Ireland.

Of the four seeds Northern Ireland could face, Switzerland are currently the highest ranked team sitting in 11th place in the FIFA World Rankings announced today.

After an impressive record of nine straight wins in Group B they went into their final match needing just a point against Portugal to qualify automatically for the Finals in Russia.

However, a 2-0 defeat in Lisbon meant they lost out to Portugal on goal difference after both countries had finished on 27 points.

Switzerland, who have appeared in 10 previous World Cup Finals, have played Northern Ireland on four previous occasions, the most recent meeting being a goalless draw in Zurich in a friendly encounter in August 2004.

While many of the Swiss squad will not be household names the GAWA will have heard of Stoke City’s Kosovan-born winger Xherdan Shaqiri who has scored 20 goals in 66 appearances for his adopted country.

A close eye will also need to be kept on Benfica striker Haris Seferovic who scored four goals for Vladimir Petkovic’s side during qualification.

Italy, who have been crowned World Champions on four occasions, are without question the most high profile nation that Northern Ireland could be paired with in the play-offs next month having taken part in 18 World Cup Finals since 1930.

The only time that the Azzurri have failed to make it through to the Finals of the competition was in 1958 when Northern Ireland topped the qualification table following a famous 2-1 victory over the Italians at Windsor Park.

Italy, who finished five points behind Group G winners Spain, may not be the footballing powerhouse they once were, but they still have quality players throughout their squad who play at the highest level in Europe.

They can call upon Lazio striker Ciro Immobile, scorer of six goals in qualification, and Southampton forward Manolo Gabbiadini - a team-mate of Steven Davis at St Mary’s.

Denmark have been frequent visitors to Belfast over the years having played Northern Ireland no fewer than six times at Windsor Park since 1978.

The last encounter was 10 years ago when David Healy’s sublime chip gave Northern Ireland a deserved 2-1 victory in atrocious weather conditions at Windsor.

The Danes, who have played in four previous World Cup Final tournaments, finished second in their group behind a very impressive Robert Lewandowski-led Polish outfit.

Poland’s only loss in Group E though came last month in Copenhagen when Denmark put four past them without reply.

Among the scorers in that game was Spurs attacking midfielder Christian Eriksen, who ended the qualifying campaign with a highly creditable eight goals.

Other players of note are former Arsenal and current Rosenborg forward Nicklas Bendtner, who scored in that 2007 defeat in Belfast, and Leicester City goalkeeper Kasper Schmeichel.

The last of the four seeded teams are Croatia, who Northern Ireland fans will remember ended Michael O’Neill’s three-year unbeaten home run with a 3-0 friendly success in Belfast in November 2016.

The Croats, who will be seeking to qualify for their sixth World Cup Finals tournament and their fifth in succession, finished just two points behind surprise Group I winners Iceland.

Their main threat is Juventus striker Marion Mandzukic, who has scored 30 goals in 80 games for the national side, including five in ten qualifying matches. He also scored in that 3-0 win in Belfast!

Real Madrid midfielder Luka Modric may now be 31, but the former Spurs man is pivotal to the side as is 29-year-old Ivan Rakitic of Barcelona.

Meanwhile, Zlatko Dalic was appointed as Croatia’s new head coach on 7 October, winning his first game in charge against Ukraine 2-0.

The Play-off games will take place on a home and away basis, with the first legs taking place between 9 and 11 November and the second legs between 12 and 14 November.

You can watch the draw live on www.fifa.com and FIFA’s social media channels.