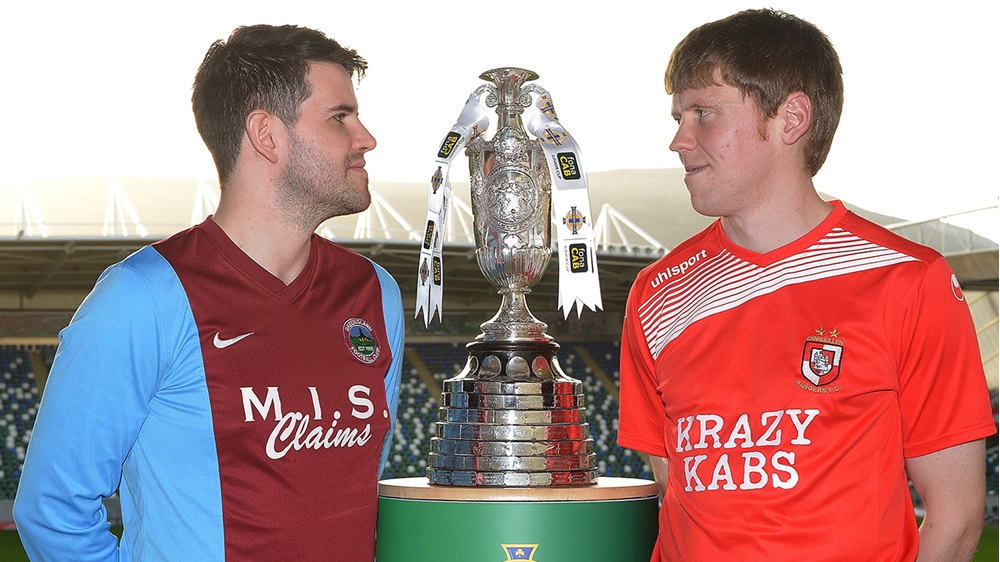 Rangers will be looking to defend the title they claimed last season with an emphatic five-goal defeat of Hill Street in the decider.

That victory confirmed the Fermanagh & Western League side as Northern Ireland's junior football kingpins but they rubber-stamped their position at the top on their way to this season's decider with a semi-final win over Harryville Homers.

The Homers had won the Junior Cup for three successive seasons before Rangers knocked them off their perch so it was a real battle of the giants at Lakeview Park. However, goals from Michael Kerr and Ciaran Smith proved enough to send the holders through to the final again.

They face Greenisland who also got the better of Ballymena opposition in the last four with a penalty shoot-out defeat of Ahoghill Thistle after a scoreless draw at Seaview.

It was a game of two halves and a real end-to-end battle but Gary Dodds, Shaun Richards, Connell McGeough and Gary Bell all held their nerve to convert the spot-kicks which booked their place in the showpiece decider.

Indeed, it was the second such victory for Greenisland following an earlier similar triumph over Ford FC back in the Fifth Round so, if it comes down to it on Monday, they'll not be found wanting.

But Greenisland, currently fourth in NAFL Division 2A, really announced their arrival as serious contenders with a stunning nine-goal thumping of 2016/17 semi-finalists Newry Celtic in the last eight on St. Patrick's Day.

And they've had to reach the final the hard way. Apart from that win over Ford, which was at their own Glenkeen Avenue ground, Greenisland have travelled in every other round to record victories over Tullyally Colts, Heights and Portrush.

Rangers, for their part, have swept aside Portavogie Rangers, Willowbank, Riada, Aquinas, Tullymore Swifts and Kelvin OB on their long road to the final.

Whoever will be lifting the trophy aloft on Monday afternoon there can be no doubt it'll be a hard earned but deserved success!

Admission to the final is £5 adults/£3 concessions.