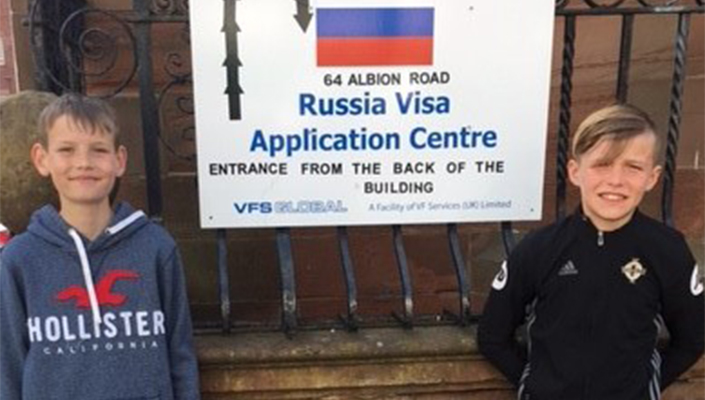 Northern Ireland will be represented - in a small way - at the FIFA World Cup in Russia next month.

Two young students, Zach Cowan and Rex Henderson (both aged 12), have been invited to take part in activities leading up to the tournament kick-off in Moscow on 14 June.

Zach, who lives in Portadown, will be participating in a major youth football tournament in the Russian capital, while Rex, from Greenisland, is set to report on various events after winning a contest for young football writers run by the Irish Football Association.

Their trip to Russia has been organised through the Football For Friendship (F4F) programme, which is aimed at fostering social values such as respect for other cultures and nations, equality and peace as well as encouraging young people to adopt healthy lifestyles.

The main activities of this year’s F4F programme - it is now in its sixth year - arean International Friendship Camp, an F4F World Championship and an International Children’s Forum in Moscow from June 8 to 15 where more than 200 countries will be represented.

Zach, a member of JD Club NI, the Irish FA’s elite player development programme, has been chosen to play in the F4F World Championship in Moscow on 12 June based on assessments by JD Club NI coaches.

The youth tournament will feature 32 International Teams of Friendship (six-a-side) and Zach will be in a team called Polar Bear. Playing as a defender, he will have team-mates from Switzerland, Hong Kong, England, Ethiopia and Belgium.

And Zach, who attends the Irish FA’s Performance School at Integrated College Dungannon and plays for Portadown FC Youth Under-12s, and the others are set to be coached by a 16-year-old from Panama. Zach will be accompanied to Russia by Irish FA elite performance coach Darren Murphy.

Rex, who is a pupil at Belfast Royal Academy and actually plays at youth level for Crusaders, is set to report on the youth football tournament and the F4F International Children’s Forum after winning an Irish FA contest to find a young football writer to cover both events.

The 12-year-old student and the other contestants had to submit a 350-word report on any local football match and Crusaders fan Rex’s report on his favourite team was judged the best by an Irish FA panel. Rex’s dad Ryan will be accompanying him to Russia.

Gazprom, which sponsors F4F and is a partner of FIFA and the 2018 World Cup, is hosting the group from Northern Ireland and the other groups from around the world.

Following the F4F tournament and the forum they will all be attending the opening ceremony and opening match of World Cup 2018 on 14 June featuring hosts Russia against Saudi Arabia in Moscow’s 81,000-seater Luzhniki Stadium.

Image: Rex Henderson (left) and Zach Cowan are off to Russia next week.