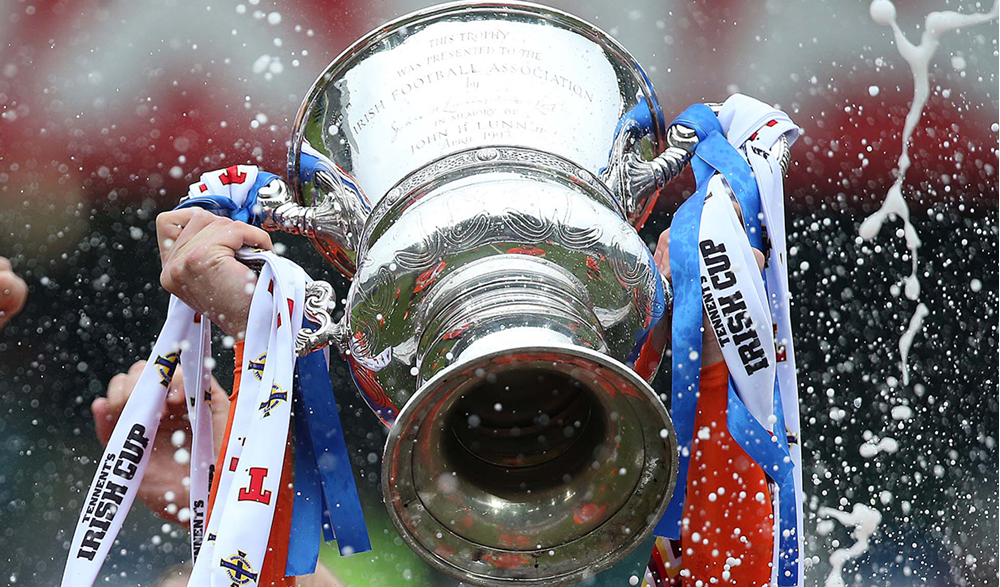 This Saturday sees the 2018 Irish Cup Final take place between Cliftonville and Coleraine at the National Stadium at Windsor Park, in what is the fourth oldest cup competition in the world.

Here we take a look back at some Facts and Figures from previous Irish Cup deciders from the past 137 years.

It will be a huge occasion for brothers Rory and Jay Donnelly who could both be in the starting line-up for Cliftonville this weekend. However, they are far from the first set of siblings to appear in the Final of the competition.

The inaugural Irish Cup Final in 1881 actually saw two sets of brothers, Thomas and Willie John Houston and Robert and Mitchell Redmond; turn out for Moyola Park, who ironically defeated Cliftonville 1-0 at Solitude.

In 2009 Cliftonville also had the last pair of brothers to appear in the end of season showpiece when Ronan and Chris Scannell played for Reds in the narrow 1-0 reverse to North Belfast rivals Crusaders.

The most goals in a final came 123 years ago in 1895 when Linfield defeated Bohemians 10-1 at Solitude, a record which is unlikely ever to be broken.

Three players have managed to score four goals in a final; Bob Hill who became the first to do so in 1892 when Linfield put seven past the Black Watch and the prolific Joe Bambrick equalled that achievement in 1930 as the Blues lifted the trophy again by beating Ballymena 4-3 in a thrilling encounter at Celtic Park.

The last player to achieve the feat was Billy McAvoy in 1969 when Ards ran out 4-2 winners against Distillery in a replay at Windsor Park four days after the teams had drawn 0-0 at the same venue.

Extra time has only occurred five times in Irish Cup finals. The first occasion was back in 1993 when Ards and Bangor played each other three times before the Seasiders came out on top 1-0 thanks to a late Paul Byrne goal.

The last time it happened was in 2013 when Glentoran came from a goal down to defeat Cliftonville 3-1 at Windsor Park.

The only occasion that penalties have decided the destination of the Irish Cup was eleven years ago in 2007 when, with the teams level at 2-2 after 120 minutes, Linfield defeated Dungannon Swifts 3-2 in the first, and to date only penalty shoot-out.

A bumper crowd is expected at the National Stadium this Saturday with over 11,000 tickets already sold, it will though fall well short of the biggest ever attendance to witness an Irish Cup final.

That came in 1954 when 35,000 people packed into Windsor Park to watch Derry City and Glentoran serve up an entertaining 2-2 draw.

The subsequent replay five days later, which ended scoreless, attracted 28,000 supporters while the third encounter, which Derry City won 1-0, drew an attendance of 30,258 – meaning an aggregate crowd of 93,258 paid receipts amounting of £12,226 to watch all three matches.

If Coleraine put aside the disappointment of losing the league title so narrowly to Crusaders last weekend by lifting the trophy for the sixth time, it will be only the 37th occasion that the cup has been won by a club outside of Belfast in the history of the competition.