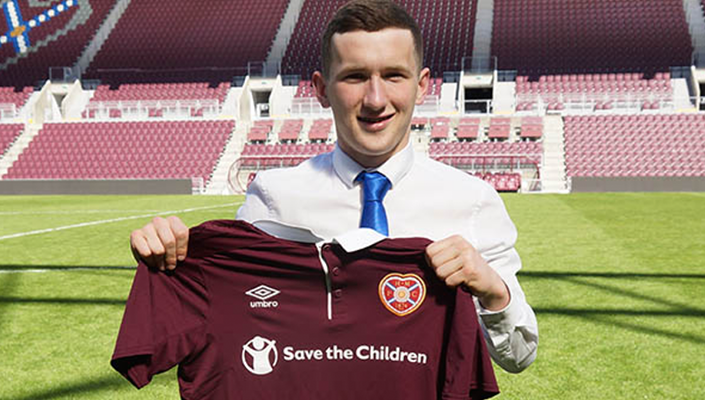 Scottish Premiership club Hearts have swooped to land Glenavon midfielder Bobby Burns on a three-year deal for an undisclosed fee.

Burns, who made his Glenavon debut just a week after his 16th birthday, has been an integral part of Gary Hamilton’s side this term scoring eight goals in 41 outings for the Lurgan Blues.

The 18-year-old will cross the Irish Sea to link up with the Edinburgh outfit in June and his agent Stephen Whelan believes it is a tremendous move for the teenager who was courted by a number of clubs during the season.

“Hearts are a brilliant club for Bobby to sign for,” said Whelan, who played Irish League football for Distillery, Glenavon and Carrick Rangers.

“From the first moment he went over there they treated him and his family superbly.

“The manager Craig Levein and his assistant Austin McPhee were fantastic and they made him feel really welcome.

“Moving away from home to play for a professional club is a huge challenge, however, Bobby is a very grounded young lad who knows what he wants out of life.

“He has a good family behind him and the fact that there are already three senior Northern Ireland internationals at Tynecastle, plus Michael O’Neill’s assistant coach Austin McPhee, means he will have a good support network around him.”

Whelan is confident that having played just over 50 first-team games with Glenavon means that the transition to the professional game may be slightly easier for Burns, but he knows there is still a lot of hard work ahead for the central midfielder from Crumlin.

“The first six months at Hearts will be tough for Bobby,” said Whelan.

“He will have to understand what is required from a professional footballer, but I know he is prepared to get the head down and work hard.

“Hearts are a tremendous club who provide a great pathway for young players to progress, last Sunday being a prime example when they had four teenagers in their match-day squad versus Celtic.

“Having already experienced first-team football in the Irish League will though stand him in good stead.

“He has already been told he is going over there not just to be part of the development side but to be in and around the first-team squad.”